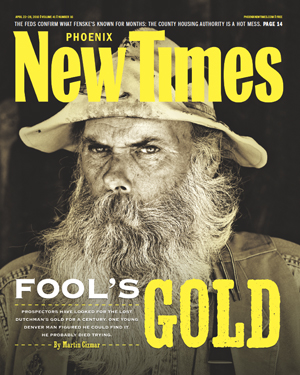 The Musical Instrument Museum – which makes its public debut this weekend and will feature instruments from every country in the world – is, honestly, to die for.

Seriously. Someone perished in the act of procuring instruments.

As you can imagine, storing and displaying multiple instruments from all 195 countries on Earth is a daunting task. Start thinking about all the wars, political conflicts, class struggles and environmental challenges that are going on on this planet, and tagging all that gear seems like mission impossible.

The idea for the museum was born 4 and a half years ago in the mind of Bob Ulrich. At the time, Ulrich, who recently announced his retirement as President and CEO of Target, was traveling to museums around the world in search of a high-quality work of art. (Ulrich had his eye on an Impressionist painting, which he planned to donate to the Minneapolis Institute of Arts after purchasing it.)

While hanging out in Belgium one day, Ulrich introduced the idea to a friend. Not a bad proposition, said his friend, but for that amount of money, why wouldn’t you buy a museum?

The idea stuck. Soon after, Ulrich funded a titanic $250 million museum that would sonically represent every country in the world — not just Western instruments, as most others do.

On March 1, 2007, Ulrich and his team decided that Phoenix would be the site. Eleven months later, they broke new ground.

“Phoenix is ​​a growing city,” says Bill DeWalt, president and director of MIM. “Also, it’s a young place that lacks the richness and depth of cultural institutions, where other cities, like New York, have more institutions than the city can support.”

Opening a museum in the Valley is definitely a risk right now, especially as other local cultural institutions continue to struggle. A few months ago, the Phoenix Art Museum, the largest museum in the Southwest, reduced its hours of operation from six to five days a week. The Heard Museum West in Surprise closed its doors last year, while the West Valley Art Museum – which hopes to reopen but has not yet done so at press time – closed on August 19, 2009. The Heard West and the WVAM have both been touched by their estrangement.

The Phoenix Musical Instrument Museum isn’t centrally located either — the building is about a 25-minute drive from downtown Phoenix. However, financial solvency can be achieved because, like the Museum of Modern Art in New York and the Art Institute of Chicago, the MIM is certainly not a one-visit museum.

Downstairs is a celebrity gallery where patrons can experience the “Imagine” piano (on which John Lennon composed the iconic song) as well as instruments played by George Benson and Paul Simon. There is also an impressive and intimate 299-seat theater which will present a full program of concerts. (Acts slated to appear this summer include King Sunny Ade, Sierra Leone Refugee All-Stars and finger-style guitar virtuoso Tommy Emmanuel.)

Upstairs, 10 regions of the world are represented in five main galleries. This is where you’ll find crazy stuff salvaged from the farthest corners of the world, including ntan drums played by the Asante people of Ghana and a saung guak Burmese harp that was nearly destroyed during Cyclone Nargis and which Senator John McCain’s office helped pass through US customs. There’s also a Harmony Sovereign Jumbo guitar from the 1970s, an American-born instrument that stands over eight feet tall and weighs 80 pounds. The museum experience will also include video and audio clips of the exhibits, which can be enjoyed in peace while wearing wireless headphones provided by the museum.

The museum’s five main curators went out into the field to collect instruments for the museum. In other cases, consultants from around the world have been hired to source parts for the MIM.

As you can imagine, filling the museum led to many adventures. For example, a Malawian consultant was forced to ride a borrowed bicycle for four hours just to reach his instrument collection destination. In a case that turned out to be deadly, Botswana’s consultant assistant was killed on the road during that country’s Independence Day. And many people hired by MIM have contracted malaria.

Dr. Amanda Villepastour, curator of the Africa and Middle East gallery, encountered her own travel difficulties when visiting a handful of African countries (she lost two pieces of luggage at the airport and embarked on a 350 mile road trip in 4×4). driving a vehicle that would not shift into fifth gear). But Villepastour – who moved to the scholarly side of music as an ethnomusicologist after a career as a keyboardist for the Eurogliders, The Thompson Twins and Gang of Four – found much more on the continent.

“Africa is not all drums. The continent has every instrument imaginable, and many African cultures do not drum. For example, South Africa has only three indigenous drumming cultures,” says Villepastour , which adds: “You drive for 30 minutes [in Africa] and it’s a totally different world. It’s not like driving from Phoenix to Tempe. Clothes, houses, instruments and people [in Africa] are all different.”

Villepastour also explains that some instruments from galleries in Africa and the Middle East, such as those acquired from the Democratic Republic of Congo, have never been seen publicly. Other items in the collection include sound-producing devices made from recycled items, such as tin cans, FedEx overnight wraps, and spider egg casings.

Another interesting thing is that over time the instruments, rather than sitting on the walls for years, will be updated and rotated. This will require more field collections from Villepastour, fellow curators and consultants.

Hopefully the items yet to be hunted down won’t be to die for.

Nagaland: the “simplest” musical instrument in the world applies for a patent