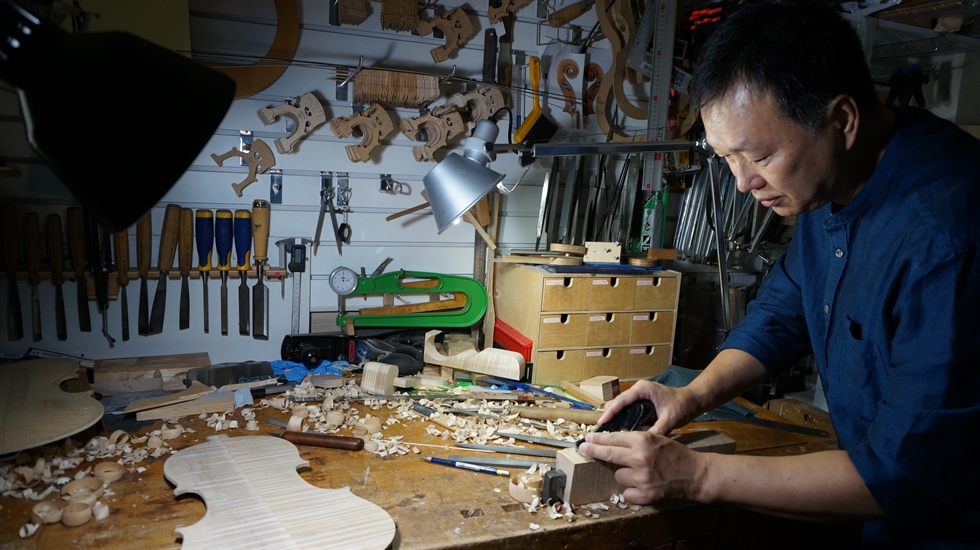 Lee Sung-yeol has been a computer engineer for nearly 20 years. One day, he decides to change course and become a luthier. Well, it wasn’t exactly like that. You will have to read the whole story.

He was born in Seoul to a Korean army officer father and a housewife mother. When he was eight, his father died, his mother became poor, and Lee’s life changed. “I had dreams, but later realized I had to work to help my mother,” he said of his post-college years.

As a child with a passion for supercomputers, he graduated from college as a computer engineer and worked at the exclusive supercomputer company that operated Korea’s first supercomputer, CRAY Research. “Those were many years of joy,” he recalls.

But as the years passed, computers became more and more common in every home in Korea, and the work became extremely hard, Lee recalls. “We sometimes worked nights and weekends. There was no work-life balance and I got burned out,” he said.

He then found his escape in an old love: music. “I remembered that when I was young, I had the chance to listen one day to one of Bach’s cello suites. It was magical and since then I had a little dream that one day I could play at least one movement of this incredible piece.”

Lee started playing the cello, joined an amateur orchestra, and gradually his life became more focused on music and less on work. Yet the engineer inside him took over. “The music gave me great joy, but more than that, the instruments themselves fascinated me and I wanted to build them.”

At this point, he was already 43 years old, married and the father of two children. He knew he could only learn to make violins professionally overseas, but leaving Korea was not an easy decision to make. “The one who helped me the most with this was my wife, who knows me better than anyone. She said that my love for engineering and my love for music could make me a great luthier. She encouraged me to go to Italy,” he said.

“Years later, when I won international awards, it made me happy mainly because I saw the happiness on her face. I think for her, my winning awards were kind of a sign that she helped me make the right choice,” he continued.

He said goodbye to his family and friends in Korea and moved to Italy. The early years were not easy, as cultural differences made life more complicated. He sometimes had moments when he felt humiliated, such as when immigration officials yelled at him and treated him like a refugee.

But things got better as he adapted to Italian culture. Moreover, in violin making, he excelled. In the city of Cremona where the great Antonio Stradivari lived and worked over 300 years ago, today there are many luthiers, tools, books and ancient musical instruments to learn. There’s also the International School of Violin Making, where Sung-Yeol graduated with the incredible final mark of 100.

He didn’t stop there. During his stay in Italy, he won first prize with one of his cellos in the competition for string instruments in Pisogne. Few luthiers win first prize while they are still in training. After graduating, he worked as a restorer at Carlson & Neumann in Cremona, one of the best-known violin workshops in Italy. There was the chance to learn from the best experts in Italy and to see many valuable instruments. And after five years, he returned to Korea. “Those were wonderful years. Surrounded by violins and luthiers, I felt like a kid in a candy store.”

Today, Lee has his own workshop in the Gangnam district, south of Seoul, where he has been making and restoring violins, violas and cellos for 12 years.

After returning from Italy, he also taught a course on the structure and history of violins at Seoul National University’s music department. He started his business selling and repairing instruments for musicians he knows personally and his reputation has spread.

“However, there are many Korean luthiers today who studied in Europe or America. They come back to Korea and make very high quality instruments. Therefore, I always recommend that musicians who are looking for an instrument look into the instrument, old or new, with great care, for the workmanship and the sound quality, and not only for its age. My customers are those who have understood this. Today, old instruments still in good condition cost extremely expensive, so buying well-made contemporary instruments is much more affordable.”

Lee has proven its high quality craftsmanship. During his work in Korea, he gained international recognition by winning a silver medal with one of his cellos in one of the most important competitions for luthiers―the Mittenwald String Instruments competition―in Germany in 2018, and won the “Special Prize for Outstanding and Unique Entries” with one of his violas at the Beijing International String Instrument Competition.

He humbly looks back on the choices he has made in his life. “I still don’t know what the end of my story will be, but I feel lucky. Even though I had to give up some financial benefits at the time, I was able to fulfill my dream of making violins. , I got to know new friends, musicians and special luthiers, that I wouldn’t have had the chance to know otherwise,” said Lee, who is still an engineer today, but with a different set of tools.


Born in Israel, Hagit Gili Gluska is a luthier who changed careers after years of practicing law in the office of the Attorney General of Israel. She studied the art of violin making in Italy and has since worked in Italy and Korea. It specializes in the manufacture of violins, violas and cellos.

Batten the hatches! Investment firm executives in the loan and bond industry are beefing up their defenses against the market storm

businesses must be in good health to access loans