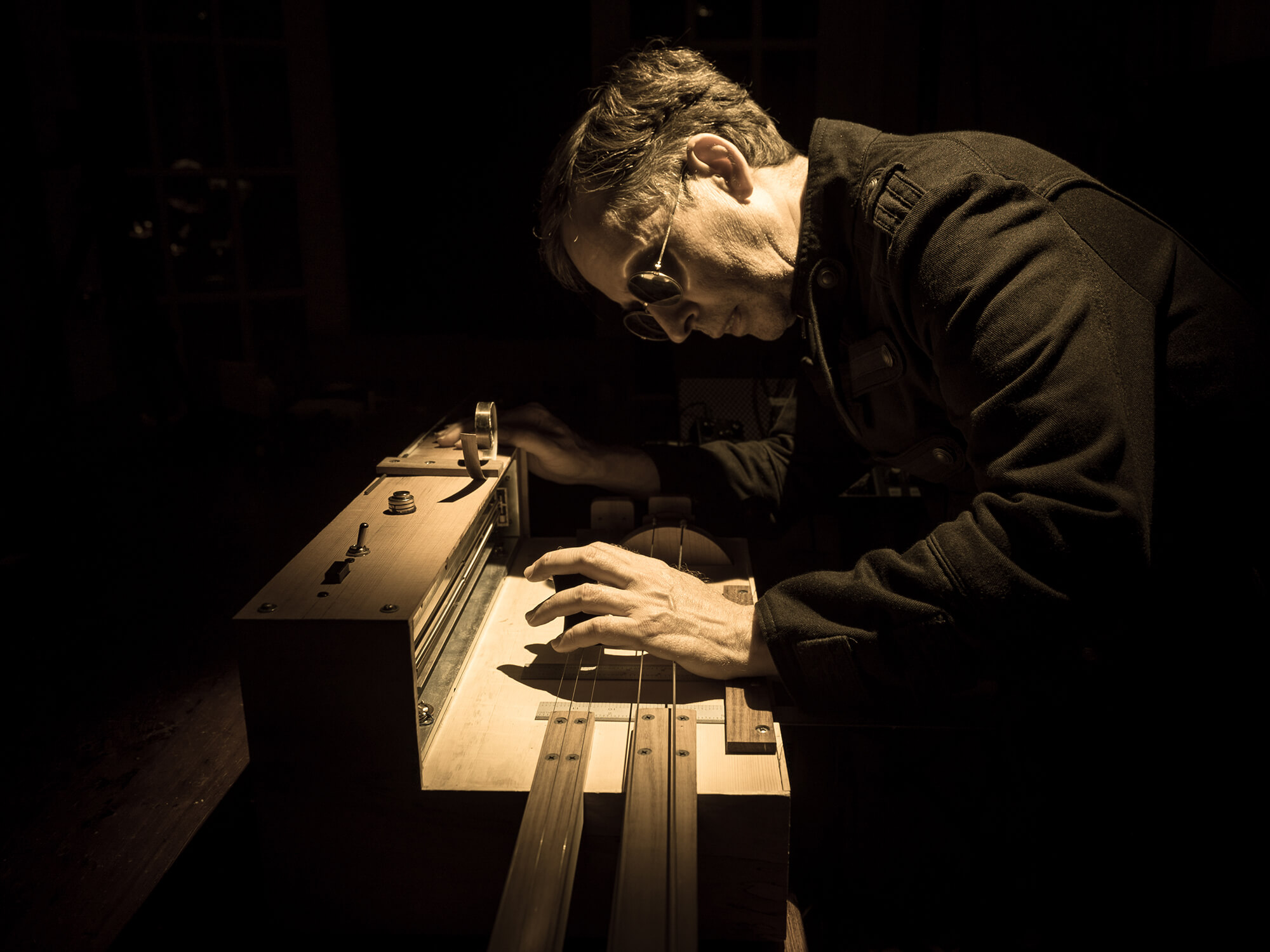 The Apprehension Engine: the most terrifying musical instrument in history | Guitare.com

There are many avenues through which musicians could make a living other than starting a band, signing and releasing records. One such career path is the world of music for television, film, and video games.

These scores are often emotive, as their purpose is to help set the mood for a certain scene. Horror media, in particular, often makes use of unsettling sounds that, outside of Nine Inch Nails records, aren’t commonplace in mainstream consumer music. The search for strange sounds led to the invention and adaptation of several unique instruments.

In 2016, Canadian composer Mark Korven combined a number of existing instruments with sound effect generators to create an all-in-one device called Apprehension Engine. The tool, which features a host of distinctly creepy sounds, has been used in his work on films such as 2019 Lighthouse and 2015 The witch and, before the pandemic, he also toured with it.

Although Korven had the idea and the general design, for its construction he entrusted the project to his friend Tony Duggan-Smith, who built the instrument. The original apprehension engine debuted at the Toronto International Film Festival.

Since the instrument’s inception, around 25 more have been built and sold by Duggan-Smith – many to notable composers. One of the first went to Trent Reznor.
“You can tilt these things,” the NIN frontman said of his new toy. “There’s no right or wrong way to use it. And they tell you that when you get it, it really requires you to learn how to play it and understand it. It pissed us off, because when we got it, it looks crap. I’m not immediately good at it.

Korven’s original apprehension engine is decorated with some of his favorite comments from his YouTube channel: “That dude got a jar full of hands, I’m sure”; “It’s 3 am…why am I doing this to myself?”; “It sounds like me on any instrument”; “Worrying. Won’t it make any happy sounds?”; “My wife makes more spooky sounds in her sleep”; plus a comically simplified version of Reznor’s, which reads: “It sounds like crap”.

The instrument is difficult to play, requiring a great deal of experimentation and practice until it can be mastered. There are many ways to extract sound from the apprehension engine. It features a single guitar string and pickup, for use with electronic arcing and heavy distortion, plus an Eventide harmonizer and reverb tank from a Fender amp (which can also be played itself). same). There’s also a primitive hurdy-gurdy, plus four steel rulers and rods that can be tilted, struck and pinched. A tray of nuts and bolts can be manipulated with a magnet, and friction mallets can be used by sliding them over the body of the instrument. There are three hidden piezo pickups inside, as well as a single magnetic humbucker pickup. Confused? The video below should help put these elements into context.

As Korven explains, difficulty is to be expected when learning to play the apprehension engine. “All of this is hard to learn,” he says. “Trying to repeat one of the weird, invented sounds takes a lot of work and attention to subtlety. Exploring E-bow’s harmonics, man, was tough. Every little 16th of an inch totally changes the sound when you have a slack string and a ton of distortion.

“Since my AE [Apprehension Engine] is one of the most stuck-on, it’s filled with quirks and issues,” says Korven. “It took me a while to realize that I just had to use the problems as advantages in order to find new sounds. It is not a very reliable instrument. It’s about the constant exploration of its quirks.

As if the instrument’s tonal range weren’t vast enough, when Korven plays the instrument, he’s usually accompanied by an Eventide Harmonizer, three Boss loop pedals, and a custom-made distortion pedal.

With so many unique attributes packed into this unique instrument, it stands to reason that its name should also be unique. “The Apprehension Engine” captures the essence of the hybrid tool’s disconcerting sonic palette. But where does it come from?

“We were building the thing and I described it to my friend, Zeb,” Korven tells us. “He thought for a second and then said, ‘The apprehension engine,’ and I knew straight away that was it.”

The apprehension engine is only about six years old, but it has already started to evolve. The instrument has also inspired DIY builders to create their own versions of hybrid tools with frightening sonic potential. A Facebook group is even dedicated to them. In their own efforts, most builders usually try to copy the original design, but some add their own twist. Others have used effects pedals to expand the range of sounds even further.

Making musical instruments is an art form that dates back thousands of years. This crazy invention proves that there is still ground to be cleared. The Apprehension Engine is an exciting creation that carves out sonic spaces that other instruments struggle to reach.

For more information about the Apprehension Engine, see apprehensionengine.com.

Porchfest is back! Registrations for performers, volunteers and food vendors are open.