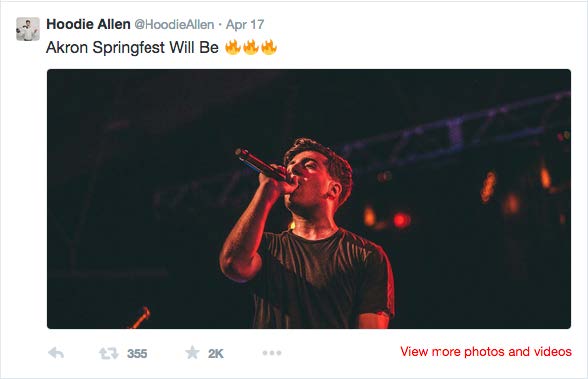 On April 17, Hoodie Allen confirmed the performance with his tweet.

Rapper Hoodie Allen has been announced as a performer at UA’s SpringFest 2015.

On April 17, Hoodie Allen confirmed the performance by tweeting:

According to Billboard.com, Hoodie Allen puts a little more pop music into his rap. Allen started working with a producer in 2009 whom he met at a college party, which earned him the award for Best Music on the MTV Campus. He became more popular in 2012 when he released his EP, All American. The EP debuted in Billboard’s top 10 best albums.

â€œI think he’s amazing and he really cares about his fansâ€¦ It’s great that one of your favorite artists is so humble and replies to your tweets and lets his fans know that he cares and that he’s grateful for them, that’s great. â€said junior Kylee Eager. â€œI can’t have enough Hoodie. I love how positive he is. His catchy songs and carefree attitude. I think maybe more people in Akron will learn to love him when they attend one of his concerts.

â€œIt’s a big improvement over last year, we had an unnamed artist that nobody knew and we have this huge number coming up, it’s really exciting,â€ said second student Andrew Ford.

The sixth annual SpringFest is how UA celebrates the end of the fall and spring semesters. This free event will take place on Friday, May 1 starting at 4 p.m. and concluding with a fireworks display at 9:30 p.m. at Coleman Common.

David Vale, Assistant Director of Campus Programs, said, â€œThis year will feature 12 activities and four new additions to attendees. The major change from SpringFest 2014 is the addition of a group. The main entertainment was professional DJs last year.

In addition to the featured artist, SpringFest offers an array of events including zipline, a kangaroo petting zoo, laser tag, mechanical bull challenge, and free games and entertainment. Students are also eligible to earn free items throughout SpringFest.

Seniors also have the chance to participate in the Ultimate SpringFest Challenge, which is a one-day event that allows them to win more prizes.

There will be a variety of carnival-style foods and food trucks, including Swenson, who is always a UA favorite.

This event is open to all AU students and faculty. Three people are allowed with a valid Zip card.

This year, the undergraduate student government, the Zips programming network, ancillary businesses including food services, parking and transportation services, and printing services, and the student success division are sponsoring SpringFest.

For more information on SpringFest, or to apply for the Ultimate SpringFest Challenge, visit http://www.uakron.edu/springfest/. If you are interested in volunteering or have any questions, contact David Vale, Assistant Director of Campus Programs, at 330-972-6568 or [emailÂ protected]