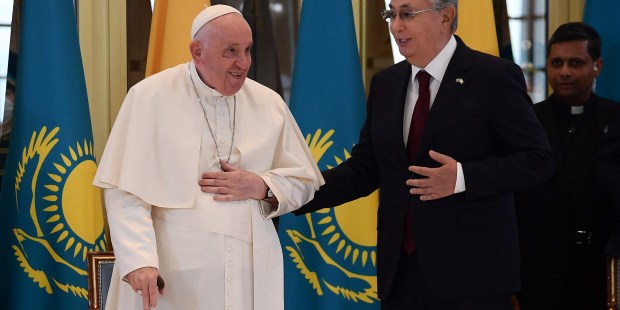 The two strings of the dombra are a call to shape the harmony from two parallel strings.

Religious freedom is the “best channel for civil coexistence,” Pope Francis told Kazakh authorities gathered at the Kazakh Nur-Sultan Concert Hall on September 13, 2022. In the presence of Kazakh President Kassym-Jomart Tokayev, he hailed the “healthy secularism” of this Central Asian country which “recognizes the important and indispensable role of religion and resists the forms of extremism which disfigure it”.

After being received by the Kazakh head of state at the Ak Orda presidential palace, the 85-year-old pontiff went to the large concert hall where political, diplomatic and religious representatives of the country were waiting for him.

The pope thanked the authorities for their invitation to participate in the 7th Congress of Leaders of World and Traditional Religions, an interreligious summit bringing together some 100 spiritual representatives from around the world, which he described as a place to promote harmony and Peace.

I would like to express my appreciation for the affirmation of the value of human life embodied by the abolition of the death penalty in the name of the right to hope of every human being. Along with this, it is important to guarantee freedom of thought, conscience and expression, in order to enable each individual to play their unique and equal role in the service of society as a whole.

Drawing inspiration from the image of the dombra, a two-stringed instrument characteristic of the region since the Middle Ages, the Pontiff underlined its vocation as a meeting place, born, he said, from the painful memory of the gulags where, in the 20th century, many people were deported en masse by the Soviet authorities.

For François, “one hears in this country the ‘notes’ of two souls, Asian and European, which give it a ‘permanent mission to connect two continents’”.

Without mentioning the neighboring countries, especially China and Russia, the Pope considered that this situation as a bridge between East and West destined it to play a fundamental role in mitigating conflicts.

The Supreme Pontiff specifically cited the “senseless and tragic war” caused by the invasion of Ukraine, as well as other ongoing clashes around the world.