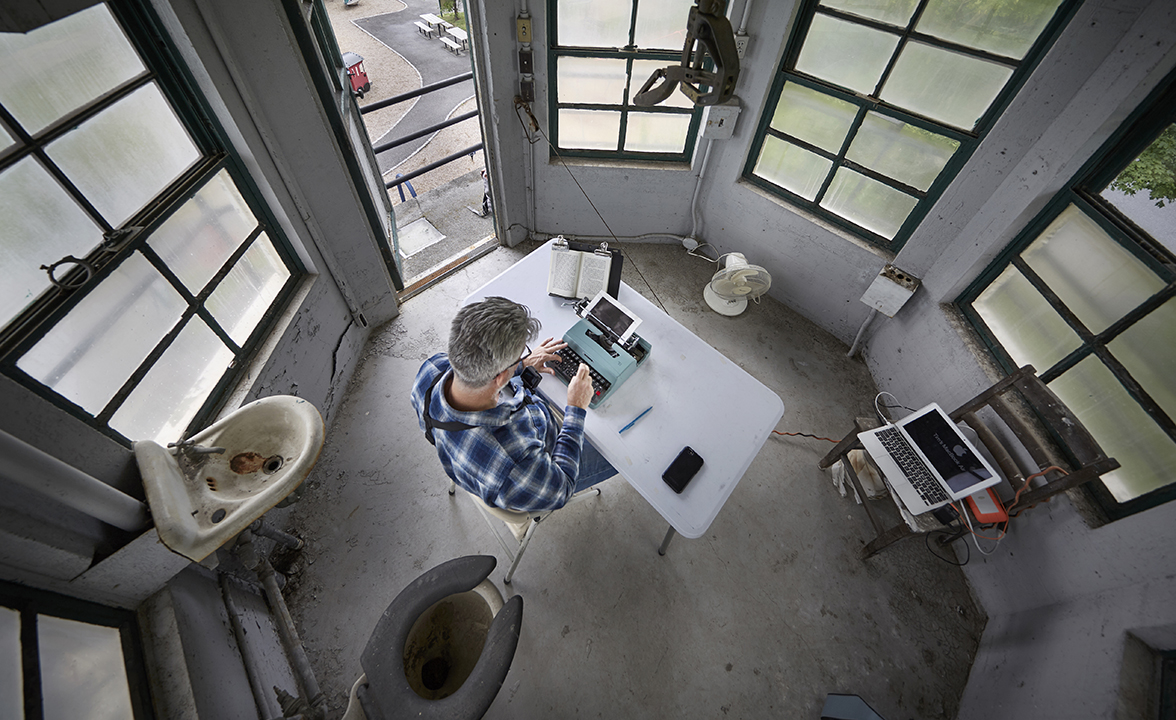 Performance and visual artist Tim Youd will be heading to the University of Nebraska–Lincoln to re-type “O Pioneers! by Willa Cather. April 1-8.

Youd’s retyping of the Nebraska alumnus’ novel will be the 72nd performance of his 100 Novels project, in which he retypes entire works of literature in iconic locations central to the author or story. The artist, who also practices painting, sculpture and video, will re-perform Cather’s “The Song of the Lark” at the National Willa Cather Center in Red Cloud from April 10-28 and “My Ántonia” in Omaha from April 1-10. may. Youd’s performances are in partnership with the university’s Willa Cather Archives, the National Willa Cather Center and the Joslyn Art Museum.

In retyping, Yod types all the words of a novel onto a single page (which is backed by a second sheet) by repeatedly running it through the typewriter. The words become illegible and the accumulated text becomes a rectangle of black ink inside the larger rectangle of the white page. At the end, Yod separates the two very distressed pages and mounts them side by side as a diptych. The relic of the performance thus becomes a formal drawing, a two-page representation of a book. The novel is present in its entirety, but the words are completely obscured.

“One day I was sitting in my studio and holding a book,” Yod said, “and I had that moment of recognition where I saw that what I was looking at was this black rectangle of text on the inside. inside the largest rectangle of the blank page. I saw this as a geometric abstraction. And then I closed the book and tried to crush it between my two hands and make all the words appear on a page, and to feel the texture and weight of those words on a page.

Youd has long been an avid reader, and literature has linked his transition to becoming a full-time artist. He began a career in investment banking in New York after graduating from College of the Holy Cross in 1989, then moved to Hollywood to produce films and commercials. In his early thirties, Youd said he found his career path unsatisfying and transitioned into art. Youd grew up around his mother’s works and had created art in his free time, and from there he knew that this new trajectory would make him happy.

Youd has done retypes across the United States and Europe, including William Faulkner’s “Rowan Oak” at the University of Mississippi Museum of Art, Flannery O’Connor’s “Andalusia” at SCAD Museum of Art and Virginia Woolf’s “Monk’s House”.

While performing in Miami a few years ago, Youd met for breakfast with art curator Sarah Urist Green and author John Green. John pushed Youd to look into Cather’s writing since the artist was unfamiliar with her prose and impact on the Great Plains. After falling in love with “My Ántonia”, Youd began to peruse the rest of her famous bibliography and appreciated her modernist approach and the “rolling beauty” of her language.

“I was hooked,” said Youd. “And I dug into it and thought about what it could really be like hitting the prairie and visiting his hometown. The more I got into it, the more I felt like it was going to be one of the great experiences in all of the 100 novels.

The Willa Cather Archives hosted Youd a few months ago to tour the campus and discuss programming. Youd will sit at a desk outside Architecture Hall and retype the novel on the same typewriter used by Cather. He chose this location to perform because it was where an iconic photo of Cather leaning against a large stone was taken when she was a student in 1893.

“Tim’s performance is an interesting and new way to connect with Cather,” said Willa Cather Archive editor Emily Rau. “I like his description of his project as producing artifacts in which stories are contained but cannot be read, in the form of a palimpsest. In many ways, the land we live on acts in this way, so it’s powerful to see such visceral representation of the legacy of stories, stories and people, both of the people represented by Cather in her fiction and Cather herself.

Youd will perform daily at the photo location from approximately 10 a.m. to 3:30 p.m. and will move to the vestibule at the north end of the Adele Hall Learning Commons in the event of inclement weather. He will also host a formal presentation with Aaron Holz, Professor of Art (Painting and Drawing), at 5:30 p.m. on April 5 at Richards Hall, Room 15.

While playing, Youd said he was concentrating on his craft. He doesn’t just leaf through novels to retype the words; rather, he performs a deeper reading of the text and translates it into a new art form. In the past, he put up a sign that explained what he was doing but no longer displayed one as it tended to cut off discussion. He also sets no expectations as to how passers-by will understand his work and leaves that interpretation up to the individual.

“I get people who want to know what I’m doing and who are curious about it and want to understand it in depth,” Youd said. “And it’s satisfying for me when I can engage like that.”

While everyone’s interest depends on their own ambition, Rau and the Willa Cather Archive hope that students and faculty will come away with ideas for different ways to interact with texts.

“Tim’s performance provides a moment for a different kind of engagement with Cather, her work, the campus and the designs of the place,” Rau said.