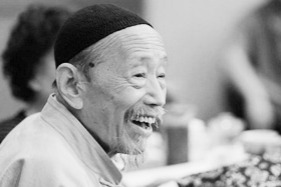 Performer Zhu Xu died this morning in Beijing. He was 88 years old.

Zhu, who was born in Shenyang, northeast China, Liaoning Province, was a renowned stage performer at the Beijing Folk Art Theater.

Zhu is well known for his stellar portrayal of human emotions on stage. He also starred in numerous films, including Shower by Zhang Yang and The king of masks by Wu Tianming. The latter film won him the Best Actor award at the Toronto International Film Festival.

Shen Zeng, a master of theater, once said, “Those who know how to act will play the character, while those who do not know will play the script.” This served as Zhu’s motto during his long artistic career.

The seasoned artist has always carried a learned and refined image in the hearts of the public. His acting style which leaves no trace of his own character has been praised as if he “didn’t play the character, but lived it”.

Zhu enrolled at North China University in May 1949 and majored in theatrical art. His career in theater began when he rose through the ranks of a backstage technician specializing in lighting after graduation. He then gradually turned to the stage and later joined the theater troupe of the Central Academy of Drama, one of the top theater institutions in China.

When the Beijing Folk Art Theater was formed in 1952, then 22-year-old Zhu became one of its first members.