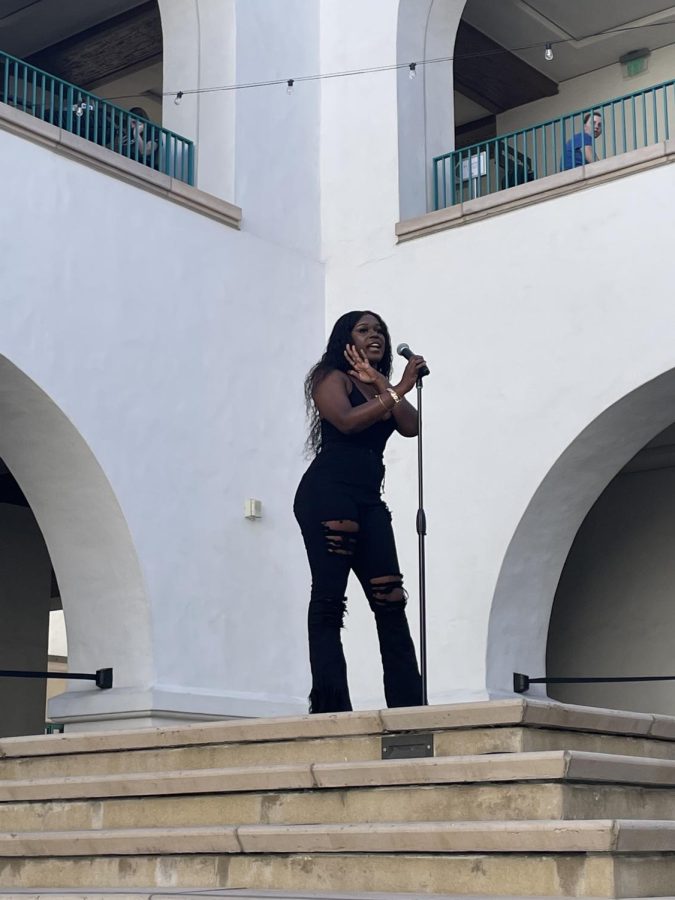 The air buzzed with static electricity as the Conrad Prebys Aztec Student Union speakers crackled. All eyes turned to the stage as a student walked out, wearing ripped black jeans and an excited smile. Over the next hour, she would share stories of ambition, love, and strength — through rap.

Hadiyatou Diallo, who goes by the stage name Haddie the Baddie, is just one of many students from San Diego State featured at Associated Students’ Nooner events. Diallo’s performance, the first of the semester, took place on February 9, where she performed an hour-long set of her original music.

“I felt overwhelmed, but really filled with joy,” Diallo said. “I didn’t expect people to sit down and listen. It really confirmed to me that I was making music that people wanted to hear.

The event itself was organized by the Student Associates, with Music and Entertainment Chair Lindsay Scholbrock as the lead coordinator.

“It’s a good start to start the year,” Scholbrock said. “We try to recruit a wide range of talent for our performances, and it’s been a while since we’ve had a rapper.”

Scholbrock mentioned that Diallo stunned audiences with her performance at GreenFest Battle of the Bands last December, where she won the runner-up title. For Diallo, this first performance is “what made [her] want to keep playing. From then on, Diallo was a natural fit for a Nooner performance.

“I love his voice,” said audience member Joalina Nyema. “The writing, the beats, the flow – they’ve all been good. I really like the variety. »

Nyema had seen the posters announcing Diallo’s performance on campus and had decided that she would prepare for the show by listening to some of his music. Diallo’s repertoire is filled with songs that reflect his journey; on one track, the lyrics allude to the inspiration she draws from her family.

“I come from a musically inclined family. I have two older brothers and we shared a room growing up,” Diallo said. “One was in a band and was always making noise, and the other was a rapper – my mom and I used to drive him to the studio. Watching them made me want to create my own music. When I got a phone and a laptop, I realized I could compose music on my own.

In all of his songs, Diallo combines the use of smart, fast-paced lyrics with an infectious sense of rhythm, calling on his audience not just to listen to his words, but to feel them.

“Her message, the energy she gives off, she carries with her,” Nyema said.

Behind the ferocious beats and confident lyrics, Diallo unveiled a vulnerable and expressive storyteller. His lyrics were about aspiration, independence and the ups and downs of modern love. Diallo cites rapper Nicki Minaj as a major inspiration for his wordplay, sound and message.

Between his songs, Diallo gave details about each track, interacting with the audience and sharing some of that energy.

In particular, her song “Big Day” emphasized her ambition and drive to create and share music, illustrating the hard work and dedication it takes to be an independent artist.

“I’ll be patient, waiting for that big day,” she sang.

Recurring Nooners provide a platform for student artists to pursue their own “big day”, offering them a way to reach their target audience directly.

“It’s a really special time for student artists, for them to play whatever they want,” Scholbrock said. “It’s a spotlight on the artist. In the union, you really hear them because it resonates offstage. Even if you are on the third floor, you can hear them. It’s their time to shine.

Diallo, who shared that she juggles eight classes, two and a half jobs and her musical pursuits, has used her time between classes to bring some positivity into student days.

“Balance is the hardest challenge – there are so many things I want to do,” Diallo said.

This sentiment was evident when, after the performance, Diallo shared that she needed to rush to her next class before she was late. However, during her performance, she was able to make an impact on her audience.

“His music gives me power and confidence,” Nyema said. “Most of the music I listen to is made up of black female rappers. Seeing that there’s someone around here doing that makes me happy.

The crowd of friends and new listeners cheered and sang throughout the hour-long set. In the moment, Diallo lived and shared a message, best conveyed through his own words:

“Whatever your dream is, you can have it.”

Kiwiuh has succeeded in the game as a dancer, musical artist and with his other online endeavors.