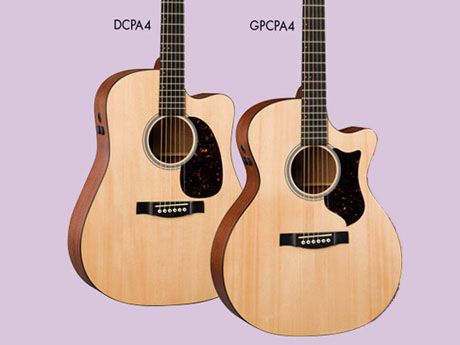 NAMM 2011 PRESS RELEASE: At the NAMM Show last January, CF Martin & Co. introduced its “Performing Artist Series” with three new acoustic/electric guitars, and it quickly became the fastest growing product line of the company. Martin Guitar follows this at the 2011 NAMM Show, where it launches three new PA4 Gloss-Top models – the company’s most affordable to date.

Along with these new models, Martin Guitar is showcasing the five new PA models it announced last October – all for the first time at NAMM. Additionally, the company is making a limited edition of 25 new GPC-42E Amazon Rosewood acoustic/electric instruments available to dealers exclusively at the show.

“Our growing Artist Series has responded to market demand for high-quality, affordable acoustic/electric guitars ideal for musicians in any setting, from recording in a home studio to performing in a big arena,” the company’s president said. and CEO Chris Martin IV.

“For decades we have dedicated ourselves to finding the best combination of the best in modern amplification with our historically high-end craftsmanship and the incredible success of this series – resulting in our acoustic/electric sales, which have increased by 58% in 2010 vs. 2009 – shows that our team’s hard work is paying off I’m excited about these new products, as well as what’s to come.

According to MI SalesTrak® data, acoustic/electric guitars accounted for 37% of the acoustic guitar market in 2010, up from 31% in 2005 (based on unit sales, January through November of each year). As the industry moves towards acoustic/electric, Martin Guitar continues to expand this popular product line, with three new cutaway models – Dreadnought (DCPA4), Grand Performance (GPCPA4) and Orchestra Model (OMCPA4) .

Like their PA1, PA2 and PA3 rosewood predecessors, the DCPA4, GPCPA4 and OMCPA4 are constructed with solid woods. The back and sides are matched from African sapele, similar in appearance and tone to mahogany. Matching Sitka Spruce tops utilize Martin’s hybrid “A-Frame” scalloped bracing.

Each of the new models features a thin, more parallel taper at the 12th fret, allowing for a more comfortable playing width all the way to the neck. Bridge spacing is also changed to 2 3/16″ – splitting the difference between Martin’s two traditional spacings.

In addition to the improved look, feel and performance of our existing Performing Artist Series models, these new additions also include the new streamlined Fishman F1 Analog electronics system.

The limited edition GPC-42E Amazon Rosewood features solid back and sides crafted from matching Amazon rosewood, a close relative of Brazilian rosewood in both looks and sound. Its tone is complex, resonant and powerful – a perfect match for the scalloped braced Adirondack red spruce top – prized for its big, open bass voice.

This is the first Performing Artist guitar to include a dovetail neck-to-body joint. Colorful heart abalone bead adorns the top in the stylish 42 pattern. The ebony fingerboard is bound in ivoroid and inlaid with Martin’s Golden Era/Style 45 snowflake pattern.

Alternate flowerpot inlay adorns the headstock, and the guitar is equipped with Fishman® F1 Aura®, featuring the stunning realism of award-winning Aura Acoustic Imaging technology in a distinctive, easy-to-use onboard preamp system.

A limited lifetime warranty covers all “Performing Artist Series” models purchased from authorized Martin dealers in the United States and Canada. To protect your investment, each guitar includes a brown hard case.

Get MusicRadar straight to your inbox: Sign up for the free weekly newsletter