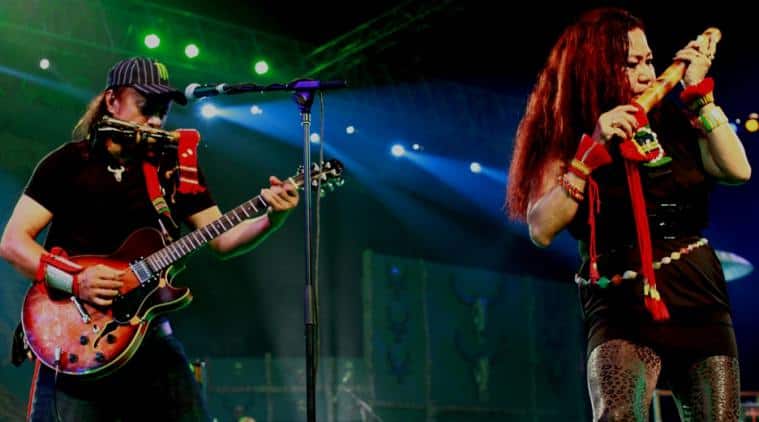 Nagaland: the “simplest” musical instrument in the world applies for a patent

“To be honest, I found it a bit awkward when I first tried it,” says Praveen V, a former National Innovation Foundation (NIF) intern, “It made me wonder – would this really work?” In April 2017, Praveen traveled from Chennai to Nagaland for 45 days to assess, on behalf of NIF, the handiness and popularity of a small bamboo instrument called Bamhum, invented by 57-year-old Naga musician Moa Subong. However, for Praveen, 24 hours with Moa changed all apprehensions. “We went to do a demo at Shillong, and that’s when I realized how wrong I had been. The public response has been tremendous,” he says.

At that time, the Bamhum, a bamboo wind musical instrument, had already existed for more than a decade in Nagaland. Just a month before Praveen’s visit, in March 2017, Subong won the National Grassroots Innovation Award, presented at a ceremony at Rashtrapati Bhawan. In 2005, the instrument had its first official launch during the International Bamboo Festival in Shillong.

This was after months of “trial and error” by Moa. The process began in 2004, when Moa was looking for a traditional Naga instrument that would best represent the compositions of his wife, Arenla. The duo started Abiogenesis, a folk fusion band from the early 1990s.

“There aren’t too many traditional Naga instruments – we have a few, but our options are limited,” says Moa, adding that the guitar, piano and violin are “too Western” for the music they make.

“Anyway, I tinkered for months. And kept failing. Arenla would be amused,” he said. Then one morning in December 2004, while Moa was performing the daily test exercise, Arenla shouted from the other room, “’Moa, what’s that beautiful sound?’ And then I knew that I had finally found what I was looking for.

The “easiest” musical instrument in the world

Between the years 2005 and 2017, Bamhum’s was promoted only by Abiogenesis. “Arenla was Bamhum’s lead vocalist and main player,” says Moa, who calls his creation “the easiest musical instrument in the world.”

The Bamhum is a bamboo wind instrument. Subong calls it the “easiest” musical instrument in the world.

The Bamhum, shaped like a small bamboo flute, requires the user to hum a tune into its “hole”, which instantly produces a melodious, reverberant sound. “That’s probably why it’s popular – even a novice can use it,” says Moa.

Alobo Naga, one of Nagaland’s most popular musicians, adds, “I used the Bamhum for a few of my performances. It is certainly one of the easiest instruments to play. But of course, you have to know how to sing,” he says. “It’s a clever idea – when we were kids, we used to make similar instruments out of papaya stalks. But using bamboo is pure genius.

Bamboo is abundantly available in Nagaland. “The type of material means Nagaland – we have bamboo houses, and most of the things we make are bamboo,” says Moa, adding that the round, hollow bamboo is like a “ready, God-given body” for the Bamhum.

Often the instrument is compared to the flute. “It sounds like a flute,” says Moa, “but learning a flute can take up to a year, but you can master Bamhum in a week!”

Beyond genres and borders

Currently, Bamhum is produced in a home workshop by Moa alone. The process takes a few months. After picking up the “good” bamboo, he tests it for 6 to 7 months. “We don’t need a lot of machinery — a stove to heat the iron rods to make the holes, and the usual cutting equipment,” he says. The Naga tribal cloth is attached to the end of the instrument.

In March 2017, Subong won the National Award for Grassroot innovation, presented at a ceremony at Rashtrapati Bhawan.

The instrument is now sold at select retail outlets in Nagaland and an online retail space called Ilandlo. From this year, the NIF – which is an autonomous body of the Department of Science and Technology of the Government of India – is helping Moa to go into mass production by setting up a manufacturing unit.

“Orders for the Bamhum come from Bangalore, Hyderabad and Mumbai,” says Imtisunup Longchar of ilandlo.com, the online portal that sells indigenous products from the northeast.

The four-piece folk fusion band from Moa and Arenla, Abiogenesis.

Moa also invented another instrument, the Tikzik, a bamboo percussion instrument that produces four types of sound. But it was the Bamhum (composed of the words “bamboo” and “hum”) that caught everyone’s attention. “It works particularly well with the genre of music Abiogenesis done,” Moa says, referring to “Howey” music, a special genre of Naga folk fusion that the band is credited with creating. Abiogenesis performed in Thailand, Russia, Bhutan and Myanmar.

“The Bamhum can be played in any genre of music: classical, folk, jazz, blues, gospel, pop, etc.,” explains Moa, who is also seeking to patent his instrument, with the support of the NIF. It’s not the easiest thing to achieve for a musical instrument, however. And although Moa is aware, he sees no harm in trying: “If you create something, you would obviously want to protect it,” he says.