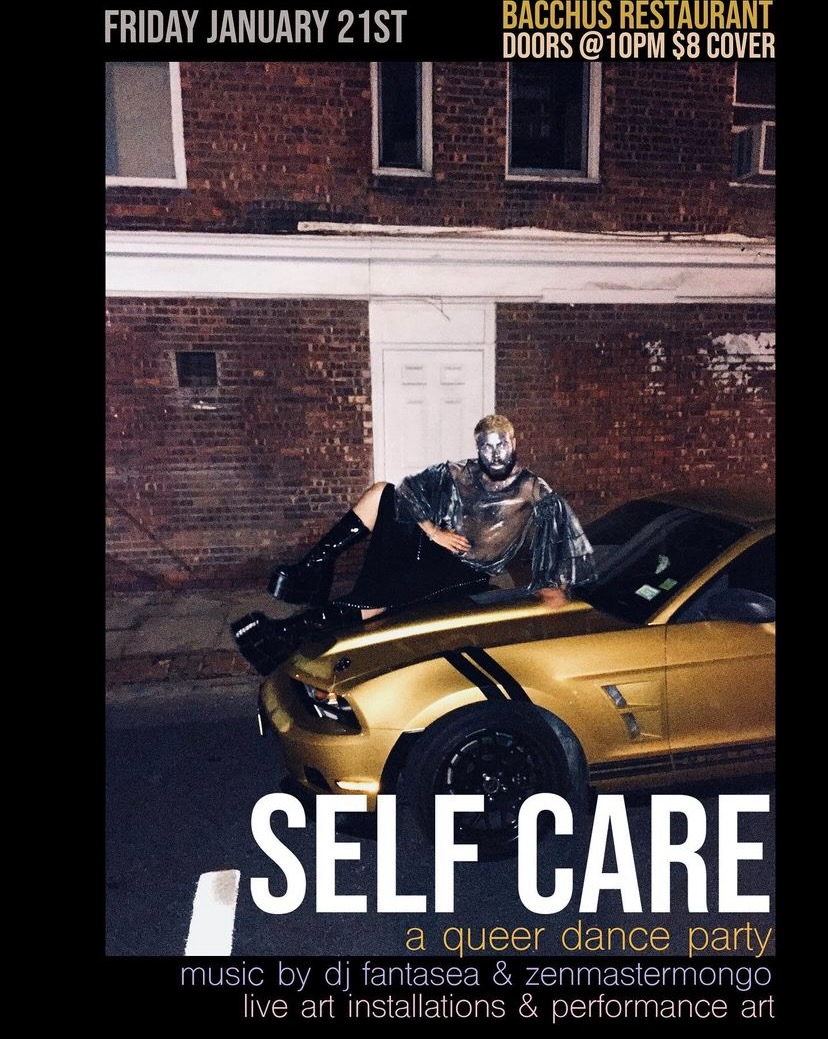 On Friday January 21 at Bacchus Restaurant, DJ and Drag Performer Matthew Rojas presented a fourth addition to his “Self Care” parties that he has been hosting since late 2021.

The series of events, which began on October 8, are billed as queer dance parties featuring music by Rojas himself, who also features DJ Fantasea, as well as live art installations and performances by other guests throughout the night.

The event focuses on providing LGBTQ+ members of the New Paltz community with an accessible space that is truly theirs to have fun.

“Get together, gather all your friends and come take care of yourselves under the lights, the lasers and the music played by me for you!” Rojas gave guests instructions in an Instagram post for the Oct. 8 show. “There aren’t enough spaces in New Paltz or the Hudson Valley where gay people can congregate, wave their freaky flags and dance together.”

Like previous nights, the cover charge for the most recent show was $8, but Rojas also said on Instagram that “no one will be turned away for lack of funds.”

In addition to hosting “Self Care,” Rojas also serves as a DJ for events hosted by Hudson Valley-based drag collective Haus of Peculiar. Performing his own individual sets and hosting the drag shows themselves, which typically take place in the New Paltz area of ​​Snug Harbor as well as Bacchus, are just two of the many contributions he makes to the queer community of the city.

During the height of the pandemic, Rojas also held numerous outdoor Haus of Peculiar events in Hasbrouck Park. With the return of live events following the COVID-19 closures, Haus of Peculiar hosted countless events over the past year with their own theme, some centered around celebrating members’ birthdays, including Rojas’. They also made appearances at various drag events in other upstate New York cities, including Albany, Poughkeepsie, and Utica.

Support has always been an important value for Haus. All funds raised from their recent “White Rabbit” show, also in Bacchus, went to a gender-reaffirming surgery fund for one of their performers.

On the latest “Self Care,” Rojas performed alongside special guest and fellow Hudson Valley-based DJ, ZenMasterMongo, who has previously made appearances in Haus of Peculiar sets at Bacchus.

This isn’t the first time a guest DJ has been featured; the dance party series spotlighted several local musicians and music curators, such as producer and DJ Apprentess, “a local New Paltz and making waves in the bass music scene,” Rojas said in an Instagram post. announcing the November 6 show.

Nightlife and bar hopping are an integral part of being a New Paltz town resident right now. Events like Rojas’ “Self Care” parties not only support the bars that host them, but also independent artists whose livelihoods are based on performance. They rely on people attending the events and having a good time enjoying the art and ambiance they create.

When you pay cover charges at establishments like Bacchus or Snug Harbor during a performance, that money goes to keep creators going and, as Haus of Peculiar’s show “White Rabbit” shows, can also contribute to causes. very important in their lives. .

“Self Care” gives attendees the opportunity to have a fun night out, have the freedom to express themselves, and stay safe, as vaccinations and COVID-19 masks are “not only sexy but mandatory.”

This applies not only to performers, but also to bands that play in bars. New Paltz is full of creative talent, and showing up to their concerts is one of the best ways to support them directly and ensure they keep making music, spinning songs, or delivering the themes of drag they love.

As Rojas said in her Instagram post on the recent ‘Self Care’ party, “There really could be 100 people in the room and all you need is one person to believe in you!”

Allison (Alli) Dempsey (her) is a third-year journalism major and communications minor from Staten Island, NY. This is his third semester on the Oracle, and his second as an art editor. She is also a staff member of the WFNP Radio E-board, president of the New Paltz Music Collective, and runs her own music blog, Twilight Collective. You can reach her by emailing [email protected]