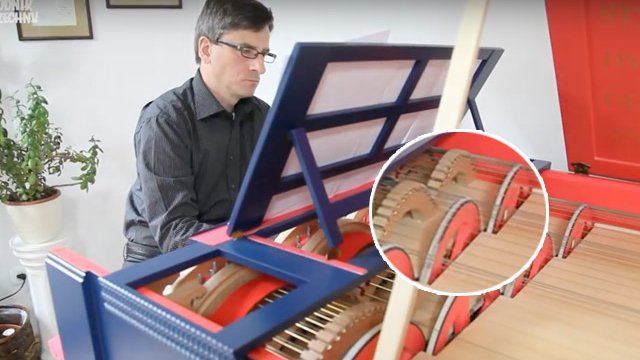 Leonardo’s organ-alto-harpsichord is an instrument of genius.

The instrument, however, did not become a reality for centuries. It wasn’t until 2013 that Polish instrument maker Sławomir Zubrzycki built the very first example (see video above).

The fascinating instrument is a hybrid of elements of a harpsichord, an organ and a viola da gamba. It looks like a harpsichord and has a set of strings, but rather than being plucked, the strings rest against rotating wheels covered in horsehair – the same mechanism that produces sound in stringed instruments.

“I have no idea what Leonardo da Vinci might think of the instrument I made, but I hope he would be pleased,” Zubrzycki said, at the instrument’s unveiling concert in Krakow. He has spent three years and more than 5000 hours bringing Leonardo da Vinci’s instrument to life since its Atlantic Codexa 12-volume collection of his manuscripts and designs for everything from weaponry to flight.

In addition to its unique sound (somewhere between an organ and a stringed instrument), the organista viola is richly decorated with a gold-leaf Latin quotation by Hildegard of Bingen, saying: “Holy prophets and scholars immersed in in the sea of ​​arts both human and divine, has devised a multitude of instruments to delight the soul.