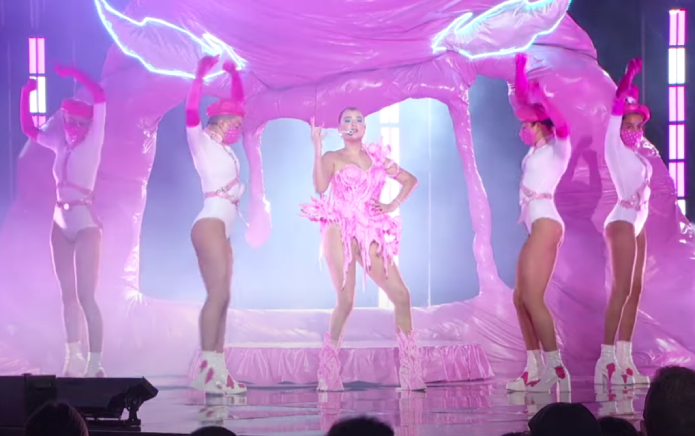 The German singer-songwriter took the stage on September 12 for a historic performance of her brand new single.

Kim made an iconic entry to the event, arriving in a baby pink convertible with her good friend Paris Hilton.

Singer Icy wore a black vinyl bodysuit with an embroidered mini dress on it before taking the stage in a pink ensemble that left fans gagged.

She becomes the first transgender performer at the VMAs, with other trans pioneers such as Laverne Cox making an appearance at the ceremony in 2014.

In 2015, Miley Cyrus took the stage with drag queens, actors, burlesque artists and trans activists in a legendary performance of her track Dooo It!

Kim makes history as the first transgender artist to take the stage in a flagship performance of this genre.

â€œI felt so anxious at the start of the lockdown because for me the most anxiety-provoking thing is not being able to work and do what I love,â€ Kim said of the inspiration behind her new single.

“Future Starts Now has come about trying to stay present, instead of stressing out about the future and all the time wasted.”

The track draws inspiration from ’80s-infused dance hits, as well as European house music she fell in love with on family trips to Paris as a child.