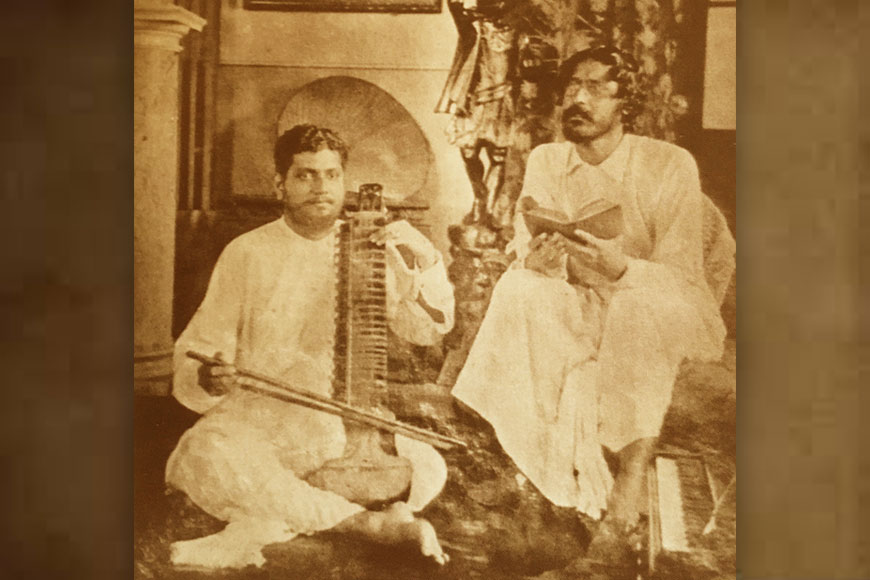 For anyone who is a hardcore Rabindrasangeet fan of any genre, must have heard the melancholic or upbeat string beats of the Esraj often. Tagore’s songs brilliantly embody the poet’s own perception of life and death, nature, God and the eternal pathos of humanity with which the melodious strains of an Esraj turn into an inherent compliment.

Of all the classical musical instruments originating in Asia, Esraj is a relatively recent addition. With a strong resemblance to the Dilruba, an instrument from Afghanistan that made its way to northern India under Pashtun rule, Esraj combined the characteristics of the Sarangi and the Sitar. In the 17th century, Esraj derived from the Taus, a heavier instrument played by Sikhs, became popular. Belonging to the Chordophone family, this bowed string instrument is still played in eastern and central India, notably in Bengal, Bihar, Orissa, Assam, Tripura and also in Bangladesh.

Apart from the Sarangi, there were no other bowed instruments on the classical music scene in the 19th century. The Sarangi was a difficult instrument to play and master, while the Dilruba and Esraj frets made it a bit easier to play. The Sarangi was also associated with performers, who belonged to a lower social status and served to accompany courtesans or tawaifs. Esraj has immense contribution in folk and spiritual music and the Namdhari sect of Sikhism created and promoted Esraj to accompany kirtan recitals. Although Esraj is intrinsically linked to Rabindrasangeet, it is not an instrument that belongs to Bengal. It became popular in Bihar and Bengal about a century ago.

Prominent Esraj player and Visvabharati University assistant professor Abir Singh Khangura said, “In a book called ‘Esrar’, the origin dates back to the mid-19th century when Maharaja Shri Ishwari Prasad Narayan Singh Bahadur of Benares created the modern esraj as we see it. now. Although used as an “accompaniment instrument”, the Esraj is just as much a classical instrument as its bowed counterpart, the Sarangi. Unfortunately, it never got its due as a stand-alone instrument. Rabindranath Tagore first heard Esraj’s magic melody when he saw the young Asheshchandra Bandopadhyay of Bishnupur Gharana play the instrument. The poet was mesmerized by the melancholy flow of such divine rapture that in 1937 he chose 17-year-old Asheshchandra as his classical vocal music teacher at Visva Bharati.”

Besides Hindu vocal music, Asheshchandra taught Bengali tappa, sitar and especially esraj for the next 50 years at Sangeet Bhavana. The Esraj had so long been merely an accompaniment to other types of music, but Asheschandra established it as an individual instrument within the realm of classical music. Thus began Esraj’s journey to Bengal. Apart from solo performances on Esraj, he actually used it as an accompaniment to Rabindrasangeet and in doing so he created a new world of artistic cooperation. Esraj has become the standard accompanying instrument for any Rabindrasangeet recital.

In Tagore’s time, it was imperative for all students of Rabindrasangeet to Santiniketan learn the instrument – not as a classical instrument in its own right but as an accompanying instrument. Pandit Asheshchandra Bandyopadhyay encouraged his followers to explore the classical potential of Esraj. His student, Ranadhir Roy was another great exponent who wanted to deconstruct the image of Esraj and play it as a solo instrument on par with Sitar or Sarod. But after Roy’s untimely death, the esraj was virtually orphaned on the classical stage. His disciple, Buddhadeb Das carried the magical heritage of Esraj. Today, two young representatives have emerged as possible crusaders for the instrument. Shubhayu Sen Mazumdar and Abir Singh Khangura, both students of Buddhadeb Das, want the public to see Esraj as an independent instrument and strive to do him justice.

Rabindra Bharati University introduced Esraj as a solo classical instrument in the program. Visva Bharati University inaugurated the Center for Esraj in 2013 under Sangeet Bhavana where interested students are offered formal training in Esraj. With the rebirth of the instrument, musicians around the world are interested in learning the Esraj. Jonathan Kay, Alexandre Jurain are some of the prominent names who play Esraj like a classical instrument. I hope this instrument will survive the test of time.