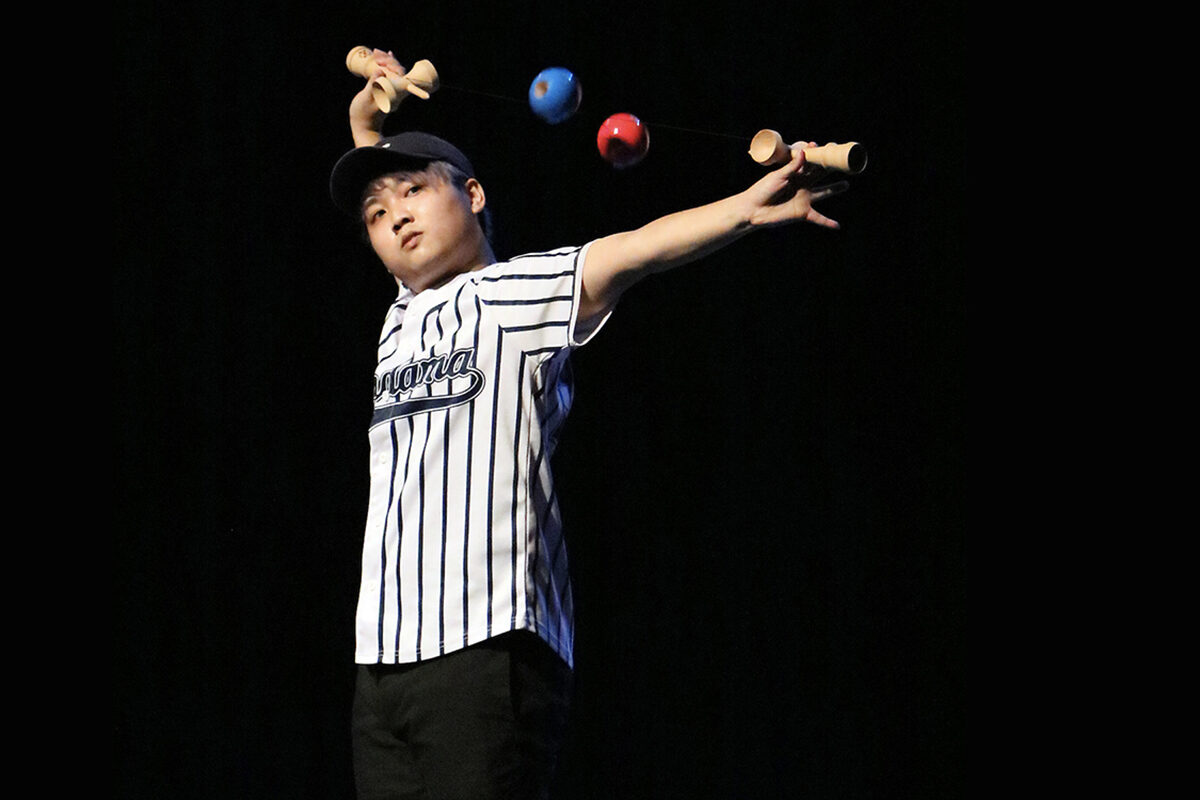 Thousands of people in the audience stood up and applauded. Pun Ho Lam, who made her first appearance on the world juggling scene, took her “baby” kendama (sword and ball) to say thank you to the audience.

When he heard the organizer announce that he was the winner of this year’s “IJA Juggling Championships”, everything seemed like a dream to him. Get on the stage of your dreams and even get kudos from juggling icon Niels Duinker. He didn’t expect the 7 years of kendama practice to unexpectedly go on a “fantastic journey”.

The IJA Festival, organized by the International Jugglers Association (IJA), which has existed for 75 years, is a big event in the juggling industry. The Festival was held in Cedar Rapids, a city in Iowa, in mid-July of this year.

Pu Ho Lam, a 22-year-old juggler from Hong Kong, entered the competition wearing a kendama as a juggling prop. He was lucky to stand out from many works and entered the final in person and won the individual championship gold medal.

For Ho Lam, the process of traveling overseas to compete this year was very difficult.

From preparing for the competition to entering the final, planning the route under the influence of the pandemic has been a bumpy road. The initial week-long trip had turned into a month and a half, and there were many obstacles and surprises.

He said he felt like “going back and forth between hell and the world”. This trip to America inspired him a lot and he looks forward to continuing to shine on the juggling scene in the future.

At the end of May this year, Ho Lam received the final selection notice from the IJA. The preliminary competition video he submitted was appreciated by the judges and he was able to travel to the United States to compete in the final.

When he received the notice, he was happy and worried because he needed a US visa to go to America. If he went through the normal application process, he wouldn’t be able to get an interview until mid-August.

At the beginning of June, he applied for an urgent visa at the American consulate, but it was “rejected”, which really frustrated him. Ho Lam cherished the opportunity to go to America and didn’t want to give up, so he decided to try his luck and wrote to the customer service department of the American consulate again, hoping to find out the reason for the refusal and ask for a second one. chance for his candidacy.

June 15 was an unforgettable day for Ho Lam, “Life is always full of hope. I received a notification that my urgent application had been accepted and that I could have a chance to have a visa interview! »

A few days later, his interview was successful.

Then he rushed to plan the trip to America. Originally, he only planned to be there for a week, but he didn’t expect the quarantine hotel for returning to Hong Kong to be available until late August. He unexpectedly got a month and a half trip to North America.

The IJA Festival was a 7-day juggling event. It was a competition, at the same time, a performance. There were eight performers on stage each day, and thousands of people watched the show on site.

Many contestants were talented, and many of them even set the Guinness World Record.

“My attitude was ‘enjoy the scene’, if I keep thinking if I can win or lose then I’m putting too much pressure on myself.”

Ho Lam took a deep breath backstage. The music played and the curtain opened. When the show started, he seemed like a completely different person.

“The audience was very enthusiastic, and when the music played and before the official start of the show, they already clapped for me. When I finished a beautiful move, they clapped and clapped. Everyone was very engaged, especially after the performance, when the audience stood up and clapped, I was so surprised!

When Ho Lam left the stage, thinking he had completed the task of this trip, there was another unexpected surprise.

The judges announced his score and surprisingly he was the ‘Winner of the IJA Juggling Championships’.

At that moment, he felt the bliss of a “dream come true.” My head was blank, I didn’t think too much, I just continued to accept everyone’s applause. At the time, I was a little scared because I wasn’t thinking about the classification. I felt that my dream would already come true if I could go abroad to participate in the competition. I was very happy to be able to perform on the international stage, and winning the prize was a bonus for me!

Ho Lam is the first contestant to win an award with a kendama as an accessory, which also means a lot to him.

He started playing kendama when he was a student in Form 4 (similar to high school in the US), and now he’s on the international stage with his kendama skills.

He hopes to introduce more friends in the juggling world to the fun of playing kendama.

Over the past 7 years, he has won many championships and finalists in various kendama competitions.

He also competed in Japan, but this is his first time in the United States. He shared, “A normal kendama has a connection line. In order to make it a juggling accessory, I mainly “removed the line”, in order to be able to design particular juggling movements.”

Talking about the reason for the outstanding performance, he explained that he carefully crafted the combination of juggling moves and music, and the audience was also very engaged and got relatively high marks in the entertainment part of the sheet. rating.

In addition to participating in the IJA festival, Ho Lam also participated in a kendama competition in Vancouver while visiting friends in Canada and won third place. He said with various emotions, “these are all very special experiences, beyond our expectations!”

Although Ho Lam didn’t have his family and friends with him when he lifted the trophy in America, he didn’t feel alone at the venue.

What surprised him the most was that Niels Duinker, a juggler who holds 8 Guinness World Records, took it upon himself to congratulate him on winning the prize.

It overwhelmed him. He said: “I watched Niels’ video when I started learning to juggle. I couldn’t be a good juggler without him!

Ho Lam happily took a photo with Niels and had a brief exchange with him. Niels also gave his autograph on the kendama he used in the competition. This experience became his treasured memory of that day.

During the IJA Festival, Ho Lam also met jugglers from all over the world and made many new friends. He showed the Epoch Times reporter a photo of himself wearing a medal and holding Wrinkle the Duck, a famous pet duck who once ran the New York City Marathon and whose original owner, Justin Wood, is also a juggler. .

The short trip to Cedar Rapids was a revelation for Ho Lam.

He not only witnessed the performances of jugglers from all over the world in person, but it also inspired him to continue his journey. Overseas circuses are more professional and have more performance opportunities.

Now, he is studying a Bachelor of Engineering in Civil Engineering at the Hong Kong Institute of Technology and Higher Education and has acquired skills in the professional field. After graduation, he also wants to try a different career path, turning his interest into a juggling career, and he hopes to perform internationally in the future.