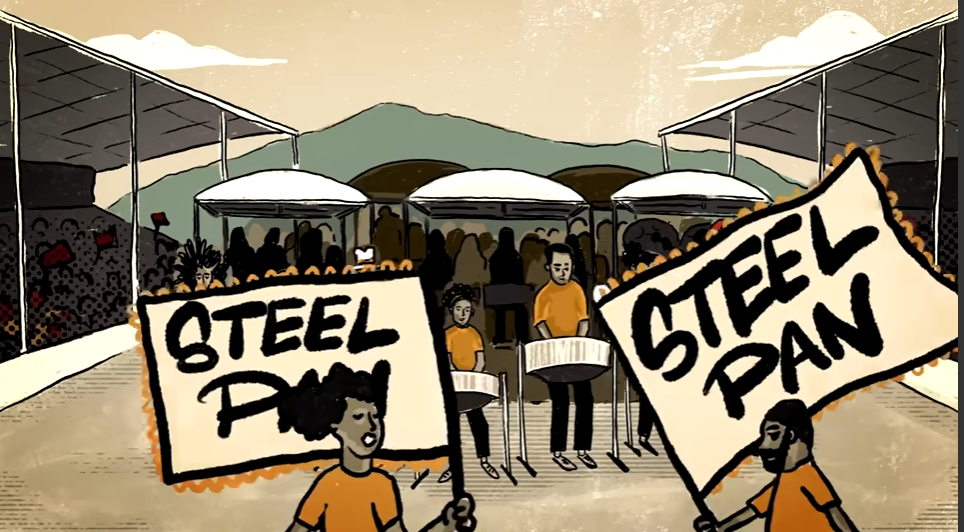 Today, July 26, 2022, the Google Doodle celebrates the steelpan, a metal percussion instrument, created and influenced by the Trinbagonians. It is the only acoustic instrument invented in the 20th century, but its origins date back to the 1700s.

It was a staple of Carnival and Canboulay, the annual harvest festivals celebrated in Trinidad, and is still used in contemporary music. On July 26, 1951, the Trinidad All-Steel Pan Percussion Orchestra (TASPO) performed at the Festival of Britain, introducing steelpan and a new musical genre to the world.

Today’s Doodle was illustrated by Trinidad and Tobago guest artist Nicholas Huggins and composed by Miami musician Etienne Charles and Lennox “Boogsie” Sharpe Other steelpan musicians who worked on the project were: Josanne Francis, Jonathan Castro and Luke Walker.

Said Huggins of the project: “When I was first approached to tackle such a culturally important topic for this Doodle, I was a bit nervous because I wanted the story told to be a story. which Trinbagonians everywhere would be proud of. I was also very excited because I love creating art that showcases Trinidad and Tobago and this Doodle will allow my country to be featured on one of the biggest stages online.

Charles commented: “First thoughts were to contain my excitement about working with Boogsie on the music, as well as Nick, Angelica and the whole Google team. Then it was about finding a process. Luckily, I had just finished an overall steelband project, but this was a collaborative composition with Boogsie and myself, so he recorded some ideas in a phone and sent them to me. From there I added my part to compliment and arranged the whole piece.

Nicholas says he hopes “…that people can take away the sense of hard work and creativity of the people of Trinidad and Tobago”.

“We are a small country on the world stage, but the fact that we have given the world such a fine instrument should be held in high esteem,” he added.

“I would like people to feel the magic of steelpan,” said Etienne. “An instrument born of Afro-descendant resistance in Trinidad. A symbol of community, artistic excellence and scientific innovation. Hopefully this makes people more inclined to come and hear the pan in its birthplace and feel the energy that comes with it. It really is like nothing else.

HISTORY OF THE STEEL PLAN

When enslaved Africans were brought to Trinidad and Tobago by colonialists in the 1700s, they brought with them their African heritage and rhythmic drumming traditions. When slavery was abolished between 1834 and 1838, Trinidadians joined in the carnival festivities with their drums. However, in 1877 government officials banned their drumming because they feared the drum would be used to send messages that would inspire rebellion. To protest this ban, musicians began pounding tuned bamboo tubes on the floor as alternatives to imitate the sound of their drums. These ensembles were called the Tamboo Bamboo groups.

Another ban came in 1930, when rival Tamboo Bamboo groups caused disturbances during Carnival and other street festivals. These groups then turned to a new alternative to carry their rhythm: metal objects such as car parts, paint cans, garbage cans, cookie boxes and this is how the idea of ​​the pan.

During World War II, carnival was banned for security reasons and musicians began to experiment with this unique instrument to improve sound quality. Over time, bumps were hammered into the surface of these objects, which played different notes depending on size, position and shape. In 1948, after the war ended, musicians switched to using the 55-gallon oil drums discarded by oil refineries. In addition to changing the shape of the drum’s surface, they discovered that changing the length of the drum allowed full ranges from bass to soprano. This formed the basis of the modern version of the pan. The steelpan grew and developed into a legitimate instrument thanks to pioneers and innovators such as Winston “Spree” Simon, Ellie Mannette, Anthony Williams and Bertie Marshall. Many of their innovations and techniques are still used today.

The steelpan is now the national instrument of Trinidad and Tobago, and is a source of great pride and true resilience for its citizens. Steelpans are now enjoyed at concerts like the Royal Albert Hall, Carnegie Hall, Kennedy Center and more. Whether in the UK or Japan, Senegal or the USA, the steelpan is an internationally recognized instrument that reminds listeners of its island origins.