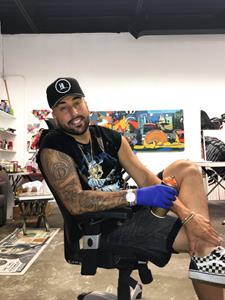 From musical artist to ARTist

Toronto, Canada, Nov. 20, 2020 (GLOBE NEWSWIRE) — Diogo Neves shows that chasing your dreams is never a bad idea when you’re passionate about what you do. He had an amazing arc – but he certainly came with his own challenges.

Diogo’s nickname, D-Snow, comes from his surname Neves, which means “snow” in Portuguese. He started playing drums at the age of nine and eventually joined a rock band. He had a knack for music – playing piano and guitar while playing drums – but he’d heard for years that he shouldn’t be stuck on his back. He was a vocalist for his band, and the spotlight was where he deserved to be – but like all great artists, he never saw himself front and center. He just loved making music and also loved making art. He started tagging in the streets of Brazil at 14 but then took his art more seriously. He would ask permission to paint graffiti – and with his Walkman stereo and a few cans of spray paint, he would paint all day and get lost in it. At the age of 21, his mother gave him a choice: either go to the local university or live with his brother in Canada. After being robbed three times in the span of a month – and at gunpoint, no less – it wasn’t a difficult decision for him at all.

When he arrived in Canada, he started working in construction with his brother and continued for 12 years. His brother played bass and they grew up playing music together, but Diogo didn’t play music for his first two years in Canada. Then they met someone who would become their friend and discovered that he also played music. They found two Canadian singers and formed a band. After changing the singers to a solo singer, they toured and performed across Ontario for two years – and even released a CD – but eventually disbanded.

Her life has been a series of ups and downs, bound together by her unwavering determination and passion. Diogo tested and performed for UGO CREW, got ripped off and robbed by a religious music producer, released his first solo CD at the Mod Club, and began performing his own solo shows and performing for seven years with artists like the Portuguese singer Ana Malhoa. Meanwhile, Diogo was still working on building and running the business with his brother, investing all his money in his music. But after having a son, investing everything in his music career no longer seemed like an option. So he met two multi-millionaires who wanted to invest in him, giving him a big contract and a paycheck to match – but all Diogo ended up doing was working 9 to 5 for an entire year in an office which emptied his mind.

After leaving the company, he was lost and no longer wanted to resort to construction. So he went to the only place that would calm him down: the art store. Trying something new, he bought a canvas and some acrylic paint – having never painted on canvas before – and it was uphill from there. Diogo would post his art on his Instagram and people would fall in love with what he was creating. They showed him love in the comments and praised him in their DMs — and then he got his first inquiry about a sale. Diogo didn’t even consider selling his work and let him do it at cost. But then more and more requests came in asking him to buy his artwork, and he started to see the possibilities.

He made a piece for Brazilian footballer Neymar Jr., who placed it in his favorite corner of his Parisian home. This unique painting has been seen by celebrities and their audiences – when they would go to his home and pose in front of Diogo’s painting, sharing their stories and making Diogo reach like no other. It was a way to make art for the biggest names in fame: Drake, Fetty Wap, Sean Paul, Megan Thee Stallion, Da Baby – just a few names in the impressive following Diogo built up. He also accomplished a few firsts during this time – being the first to spray paint a Ferrari and place his largest mural in the Picasso mansion in Miami. During this time, he made deals with galleries in Toronto and Miami and was able to make money organically from his art alone.

Next, Diogo contacted Jeremy Bieber to do a piece for his son, Justin Bieber. He responded after a while and loved his work, and invited Diogo to drop his art. He’s created art for Jeremy, Justin and Hailey Bieber, a custom barrel for Justin Bieber’s Drew house clothing line, and two other pieces of art he dropped off at Jeremy’s in Bridlepath. Justin adored Diogo’s work and took one of his sculptures for his and Hailey Bieber’s home — and from there, a partnership was formed. After the Bieber family established their agency Bieber Industries, they signed Diogo – a start to their mission to help up-and-coming artists. Diogo designed the main logo and corporate design for Bieber Industries, their warehouse art, and is now working with them.

The entertainer/musician has been on a rollercoaster ride in his life – and at 38, he’s just getting started. No one knows where his journey will take him next – but if there’s one thing that’s for sure, it’s that Diogo Neves is sure to make a splash.