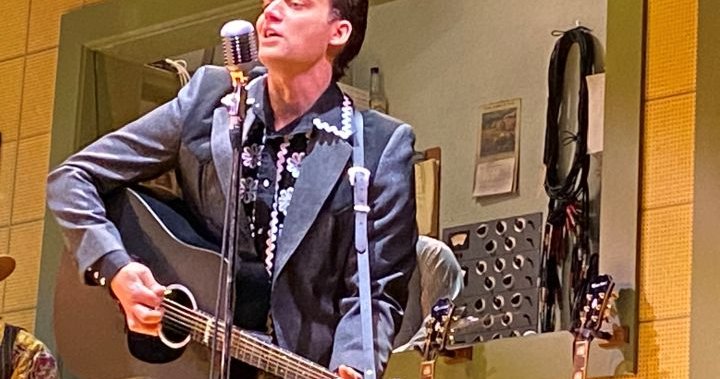 This week brings a big break for a young Alberta artist who is pretty excited to hit the stage with his rendition of a music legend.

Tribute to Johnny Cash in The Man in Black

Cash is one of four star musicians featured in the production, which runs from April 26 to May 22 at the Max Bell Theater at Arts Commons in downtown Calgary.

“This is a fictional account of a real event that took place on December 4, 1956,” Vanhevel said. “Jerry Lee Lewis, Johnny Cash, Carl Perkins and Elvis Presley had a jam session.”

The story continues under the ad

International Performers Create New Works in Calgary: “We Inspire Each Other”

Most of the songs performed in Million Dollar Quartet are the music Brayne said he grew up with.

“I was born and raised in Lethbridge and attended the University of Lethbridge in the drama program,” Brayne said.

During his studies, Brayne said he often traveled to Calgary to see live theater and added that it was rather exciting to now be on stage himself.

“It’s huge for me,” Brayne said. “All of my extended family is still in Lethbridge, so they’ll be here on Saturday cheering me on from afar.”

Vanhevel said Brayne’s family members and the rest of the audience will find plenty to cheer on watching his performance.

“Oh, he’s fantastic – I’m just blown away,” Vanhevel said. “Everything Devon does is so beautiful, truly capturing the spirit of Johnny Cash and bringing honor to him as a person.”

Brayne said he was thrilled to bring Cash and his message to the stage.

The story continues under the ad

“To present this story, through the tumultuous times of the last two years – just be nice, be nice to each other,” Brayne said.

“John was always known to have this stoicism, kind of a dark force, but he was actually quite a gentle soul.”