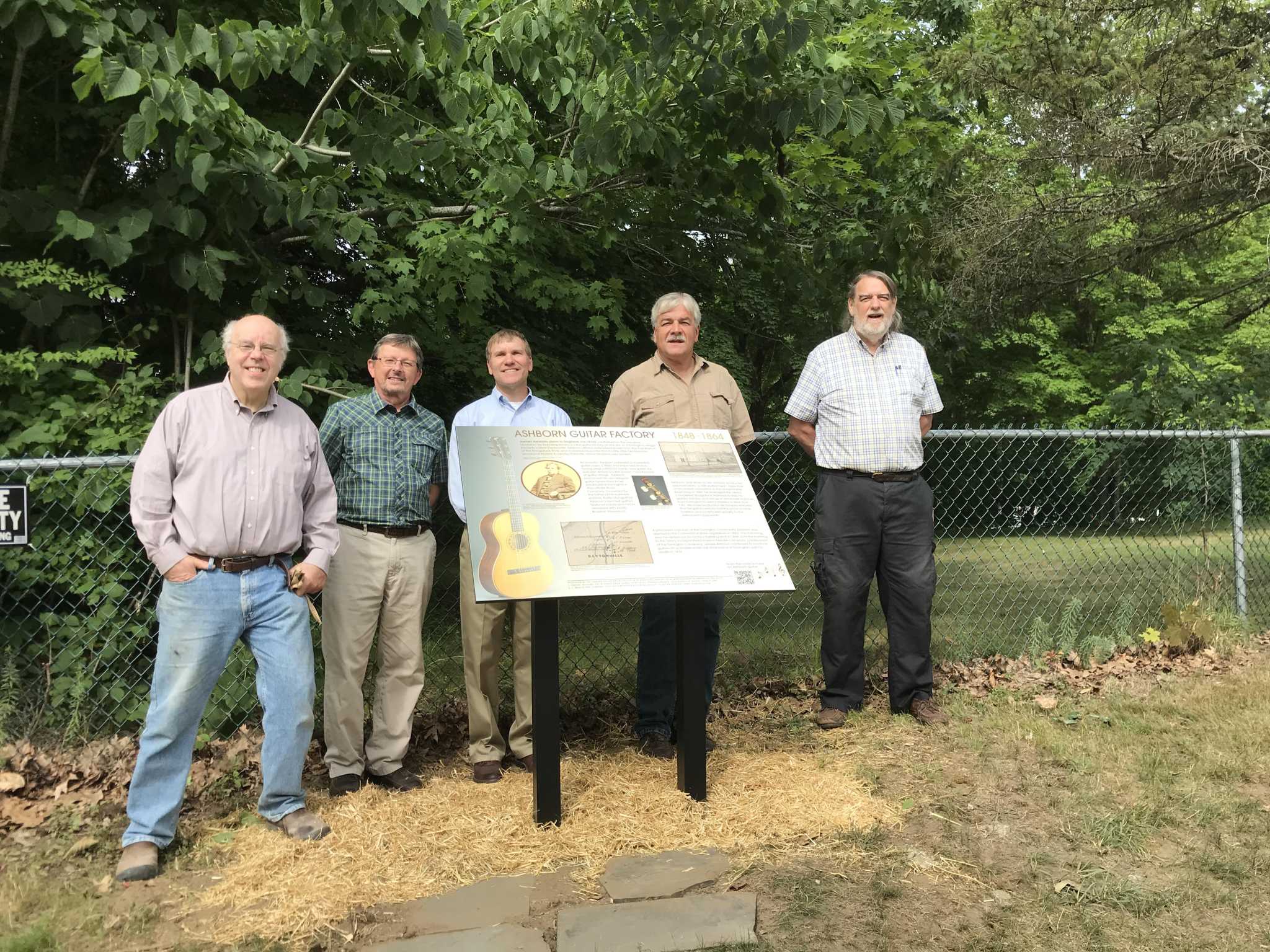 TORRINGTON – In the mid-1800s, Torrington was home to an artisan who put the United States on the map as a producer of guitars.

The store, owned by James Ashborn, was on Newfield Road. Between 1848 and 1864, Ashborn made thousands of guitars that were sold to musicians across the country, according to musician and potter Guy Wolff of Bantam and Torrington Historical Society Director Mark McEachern.

â€œAshborn brought the guitar into the 19th century,â€ Wolff said. â€œIt’s important for Torrington because when you get into the upper layers of instruments, for collectors, the Ashborn is a very well known instrument. People come to Torrington from all over the country wanting to know where the store is.

The historical society this week marked the former home of the Ashborn Guitar Shop with a detailed sign that honors the craft of the maker and the city’s contribution to the music industry.

The panel has a QR code that visitors can scan with their cell phones and be directed to the historical society’s website, where they can hear Wolff play one of the last Ashborns in the United States and learn about its history. .

McEachern credited Wolff with initiating the effort to recognize Ashborn and install the sign.

â€œGuy told me the story of people unable to find the location of the factory,â€ he said. â€œI didn’t know anything about Ashborn until about 15 years ago. It came to my attention when someone acquired an Ashborn guitar and wanted to donate it to the museum. We have two. One is very simple and the other has more details and plating. They are beautiful.”

Wolff also had an Ashborn and didn’t know it. He was working with a family estate, finding homes for a collection of instruments, and came across the company’s Ashborn while visiting the museum. â€œI saw the case (like the one he had) and said, ‘I have one,’ Wolff recalls.

â€œI said, ‘He’s an Ashborn. It was made here in Torrington, â€McEachern said.

Wolff also has a recreation of an Ashborn banjo made by Oakes, of Woodbury, which he calls “the best banjo” he has loaned. He said there were only 11 Ashborn banjos left in the world.

â€œThis thing is just amazing,â€ Wolff said, after playing a short song on the banjo. “Ashborn was crazy ahead of his time.”

â€œHe was an incredible figure in guitar history right here in Torrington,â€ said McEachern. “That’s why we put the inscription.”

Ashborn, born in England in 1816, came to the United States when he was young and worked for Firth, Pond and Hall, an instrument company. â€œIn 1842 he came to Litchfield, because the company was buying flutes from a company in a section of Litchfield known as Fluteville,â€ Wolff said. â€œThis company was owned by Asa Hopkins, and thousands of instruments were made in this factory.

â€œFirth, Pond and Hall wanted to start a guitar factory, so in 1852 Ashborn ended up moving to Torrington,â€ Wolff said. â€œHe made 12,000 guitars while in Torrington, triple the number of guitars Martin was making, which was the big company at the time. He’s the guy who popularized the guitar for America.

The story does not end there. One of Fluteville’s first neighbors was watchmaker Seth Thomas, “who had the idea of â€‹â€‹making a clock with precise parts that could be interchangeable,” Wolff said. â€œSo Ashborn’s guitars followed that idea, and each of his guitars is exactly the same sizeâ€¦ different materials, but in specific sections with only a few pieces of wood. It was unheard of to put veneers on the neck of a low-end guitar.

According to McEachern’s research, Ashborn was also an inventor. He patented a movable guitar capo (1850) and improved friction tuning pegs (1852) for banjo and guitar. He was also the first known American manufacturer of guitar strings. He made his own guitar tuners from brass produced near Wolcottville Brass Co., co-owned by John Hungerford, the father of his business partner, Austin Hungerford. Ashborn’s most sophisticated guitars featured a back and neck veneered with exotic Brazilian rosewood.

McEachern said Ashborn used the newly completed Naugatuck Railroad to ship his guitars, banjos and strings in bulk from Wolcottville – the main village of Torrington – to select retailers in New York City from 1849 onwards. His mass production techniques ensured that his guitars were selling for half the price of other manufacturers, and greatly contributed to the popularity of the instrument.

In 1863, Ashborn was elected to the Connecticut legislature, according to McEachern, and in 1866 sold his factory building to the new company Excelsior Needle Co., which would eventually become an industrial giant in Torrington. Ashborn continued to make guitars in his Torrington home until his death in 1876.

Honoring such a craftsman was a group effort, McEachern said. â€œThe donors who helped financially were Guy Wolff, Barron Financial, Jim Thibault and J. Fenton Williams,â€ he said. â€œWe were delighted to put this inscription. We have a tradition of taking the story out of our archives and disseminating it in the community, and we have granite markers in the city and the audio walking tour; we have signs in Coe Memorial Park, to highlight the history of the park and the Coe family. So this sign is another effort to make history known where people can see it.

â€œAshborn was the nation’s largest guitar maker before the Civil War,â€ McEachern said. â€œHe was the first to mass produce guitars, but he didn’t sacrifice quality, and they have stood the test of time.

McEachern hopes to put on a musical performance at the Historical Society, featuring music on Ashborn instruments. â€œWe talked about it last year and put it aside for now, but I would like that to happen,â€ he said.