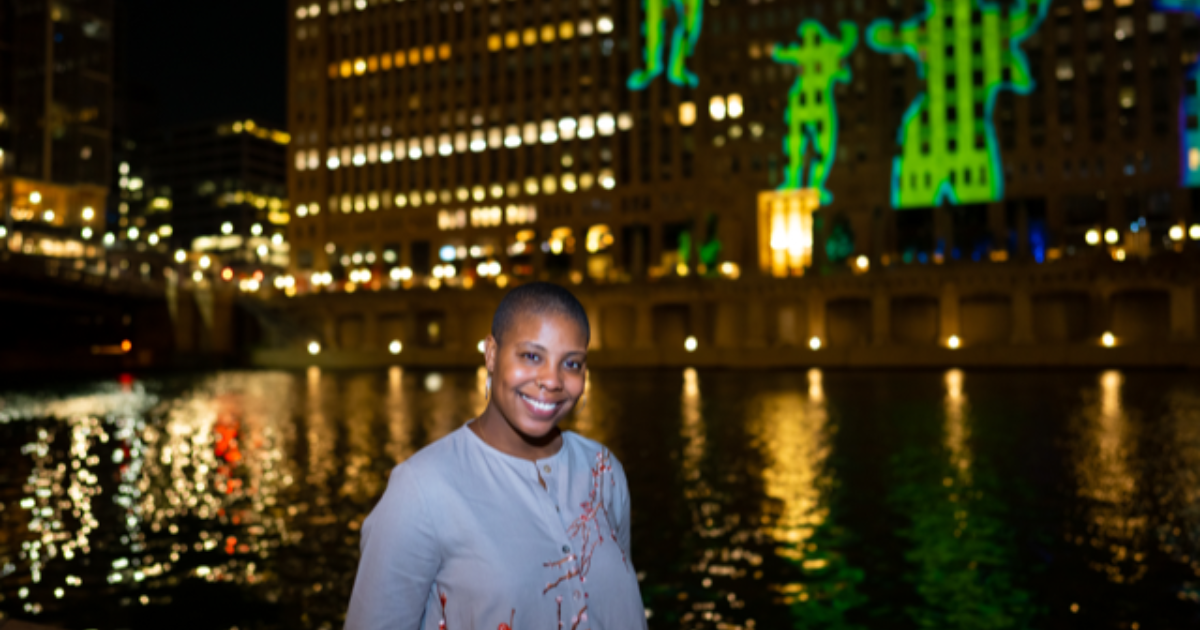 The fall 2022 Art on theMART program is set to premiere Thursday, September 8 at 8:30 p.m. and will include two new screenings highlighting Chicago’s year of dance in the city of Chicago: “Love Letters” by artists internationally acclaimed, Chinese-born, Chicago-based artist Yuge Zhou and “Trap Moulin Rouge,” a piece commissioned by local artist Jasmin Taylor.

“Chicago’s Year of Dance is in full swing and Art on theMART is pleased to continue its alignment with this City of Chicago initiative,” said Cynthia Noble, Executive Director of Art on theMART. “As a large-scale, centrally located platform, Art on theMART is a new kind of stage for performing artists and shows the world the breadth and depth of Chicago’s creative talent.”

“Love Letters” is a video projection by Zhou and depicts a lively courtship dance between two townspeople seeking each other through a maze of colorful geometries with growing curiosity, electricity and affection.

“While my solo works often depict simultaneous, fleeting encounters amidst the hustle and bustle of contemporary life, ‘Love Letters’ tells a singular story of connection through dance and technology in my video art,” said Zhou. .

“Trap Moulin Rouge,” by Jasmin Taylor, in co-production with Motion/Pictures Dance Project, takes audiences to Chicago’s South End to showcase the vibrant black culture and dance that emanates there. Drawing inspiration from the sound and aesthetic of the 2001 film “Moulin Rouge”, “Trap Moulin Rouge” combines classical, R&B and jazz melodies with a variety of dance styles with the aim of creating and promoting equity in Chicago through the performing arts. The production team of “Trap Moulin Rouge” is made up of 95% blacks and 100% women, with the financing of the project going directly to the collaborators.

“We want to create and promote more equity in the city of Chicago, and Art on theMART has partnered with us to do just that,” Taylor said. “The production of ‘Trap Moulin Rouge’ supports all Black and POC cast and crew members involved in the project who bring the play to its full potential.”

Taylor told the Cross“The name ‘Trap Moulin Rouge’ was inspired by three things. A piece of music by Pop Smoke titled ‘Aim for The Moon’. As a dancer, singer and choreographer, from the moment I heard this song , I felt like I was in a circus, and how the circus makes you feel so full and excited, so fun and free!

“Once I thought of this circus with the theme of dance, music and freedom, I immediately thought of one of my favorite films that gives me the same feeling every time I look at it: the Moulin Rouge!!The bohemian/renaissance era it is set in, the art and what is acceptable/challenged is changing;and the Moulin Rouge is a safe place for all that change to happen and unfolds, vulnerably.

“It felt closer and dear to me because of COVID. So many artists, black people, and honestly everyone was just looking for safe places to deal with all the changes.

“Trap (music and culture) is a big part of black culture in America and Chicago because of its attention to rhythmic cadences and its ability to help us rise above our circumstances, persevere, and seeking liberation through music and movement. Also, I’m a black girl from the south side of Chicago – Trap, really, that just came naturally to me.

She said it took her and her co-producer 13 months to create the four minutes of choreography, lots of tears, lots of prayers, lots of yoga, flexibility in vision and process, a team all-female cast of 10, a cast of four, a sound crew of three, an animator and illustrator located in Egypt with a seven-hour time difference, a twelve-hour filming day in March, a b-roll day on June 19, among other exciting situations.

I asked Taylor what is the message for a wider audience, outside of the South Side, who is represented in the installation?

She said, “To help bridge the racial, socio-economic and cultural resource gap between the known and revered prime cultural attraction that is downtown Chicago; and the equally culturally rich but underfunded, underrepresented, disrespectful, compassionate, and intelligent communities and black people along 79th Street and the South Side of Chicago!

“Come to this part of town, love these people, recognize how beautiful we are, see yourself in this beauty. Spend your money in this part of town, have picnics and take pictures on this side of town, meet new people in this neighborhood without the goal of gentrifying and evicting them, invest in initiatives that help in the daily lives of these people, which may not seem like they directly affect you.

“And finally, recognize that black people don’t have to prove we’re worth coming to see our neighborhoods and our beauty, it’s up to you to come see. I hope ‘Trap Moulin Rouge’ is your first look.”

When Taylor isn’t creating art, she runs the Munching Millennial, which she founded last May. “This initiative is important because there is no reason for world hunger, we have enough food. I’m also a person who thinks a lot about Maslow’s hierarchy of needs. How if you don’t have the basic necessities in life, you can’t really think about anything else – I know what it is, and all black people know what it is in this country.

“Food is a necessity, and it’s something black people have been very good at (cooking and even our different styles of eating and sharing food for companionship and ceremony) since the beginning of time. Food has been passed down to me, from both sides of my Southern parents/families and it means so much to me. I want to share this cultural history with everyone, and also bridge cultural gaps and increase connections through an activity that we all need to do. Even though all people are so unique and so different, at the end of the day, we all have to eat.

Art on theMART’s fall program will be presented twice a night at 8:30 p.m. and 9 p.m. until November 18. For more information, visit artonthemart.com.

Art on theMART, presented in partnership with Chicago’s Department of Cultural Affairs and Special Events (DCASE), is the world’s largest permanent digital art screening, projecting contemporary artwork onto the riverfront of 2, 5 acres from theMART.

theMART (formerly The Merchandise) is woven into the fabric of Chicago as an innovator in business, technology, culture, art, media and more.

Elaine Hegwood Bowen, MSJ, is the entertainment editor for the Chicago Crusader. She is the winner of the National Newspaper Publishers Association’s “Entertainment Writing” award, contributed to “Rust Belt Chicago,” and is the author of “Old School Adventures from Englewood: South Side of Chicago.” For information, Old Fashioned Adventures of Englewood – Chicago South Side (lulu.com) or email: [email protected].