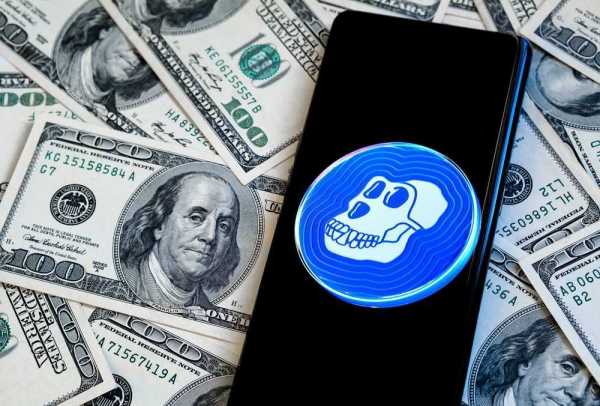 According to CoinMarketCap, Apecoin is the best performing cryptocurrency in the past 50 hours, with gains of around 12.5%. Since moving north of its 21-day moving average for the first time since early May over the weekend, ApeCoin has gained momentum in recent days. Some crypto analysts cited the release of a Bored Ape Yacht Club Non-Fungible Token (NFT)-themed music video from rap stars Eminem and Snoop Dogg as boosting sentiment towards the collection’s sister token, ApeCoin.

APE/USD last changed hands at $5.30 per token and was eyeing a test of three-week highs and key resistance in the form of late May/early June lows plus its 50DMA in the area of $6.0. The cryptocurrency is currently trading nearly 75% above the lows of nearly $3.0 per token it printed earlier in the month, with 14% of that rise having come in the past two sessions. . Indeed, the short-term technical momentum for APE/USD appears to have shifted from bearish to somewhat more positive in the short-term.

Since June 18, the pair has been supported by an uptrend and was able to break north of key resistance in the form of the May lows just below $5.20. The stabilization of broader cryptocurrency markets after big bearish moves earlier this month, as markets bet that a US recession could deter the Fed from tightening financial conditions too aggressively, helped flows to back to the highly speculative corners of the crypto space.

It remains to be seen if this trend continues and if the APE/USD can break above the $6.0 level. But if the cryptocurrency can overcome this hurdle, the door would be open for a quick rally to test a support-turned-resistance zone midway through $7.0. This would mark a jump of more than 35% from current levels.

According to CoinMarketCap, Uniswap is the worst performing cryptocurrency in the last 50 hours, with losses of just under 7.0%. The selling pressure apparently comes after the cryptocurrency failed to convincingly break through north of resistance in the form of late May highs at $6.0 per token, which may have boosted some profit taking.

But at current levels in the $5.40s, UNI/USD has managed to recover around 6.0% from prior intraday lows as the buyers have preempted a test of support in the form of the 50DMA at $5.0. Indeed, the short-term technical outlook for the pair looks quite good. It is still trading more than 60% above the monthly lows below $3.50. If risk appetite continues to return to the highly speculative altcoin space over the coming sessions, then UNI/USD is in for a good shot to break above $6.0.

The fact that Uniswap’s platform remains by far the largest decentralized exchange and seems like a safe bet to emerge on the other side of the current so-called “crypto winter”, there is always a chance that investors want to buy dip in UNI /USD.

After a break above $6.0, Uniswap would soon face new resistance in the form of the late April low just below $6.40. If he can clear that, there isn’t much resistance until a support zone turns into resistance around $8.0 per token.

According to CoinMarketCap, Dogecoin, the crypto community’s favorite dog-inspired memecoin, last traded down almost 6% in the past 24 hours, making it the third worst performer of the top 50 cryptos. -currencies by market capitalization. DOGE/USD is still trading around 45% above the sub-$0.05 lows it printed earlier in the month, but has retreated around 8% from the multi-week highs it set. reached not far from $0.08 on Monday as it changed hands in the low $0.07 zone. .

Dogecoin has suffered in recent trading from some profit taking after the cryptocurrency failed to break above a downtrend that has capped price action since mid-May, late-May lows around of $0.075 and its 50DMA at $0.076. For Dogecoin bears, the current levels may seem like an attractive entry point to load more short positions (with yearly lows in the $0.05 area as a target.

If the bulls prevail and Dogecoin breaks through the aforementioned resistance zone, the cryptocurrency could enjoy some quick gains to take it back to the next key area of ​​resistance at the $0.09 zone.

DOGE/USD is eyeing a return to yearly lows below $0.05. Source: FX Empire

What if Neanderthals created the world’s first musical instrument? | by Erik Brown | June 2022