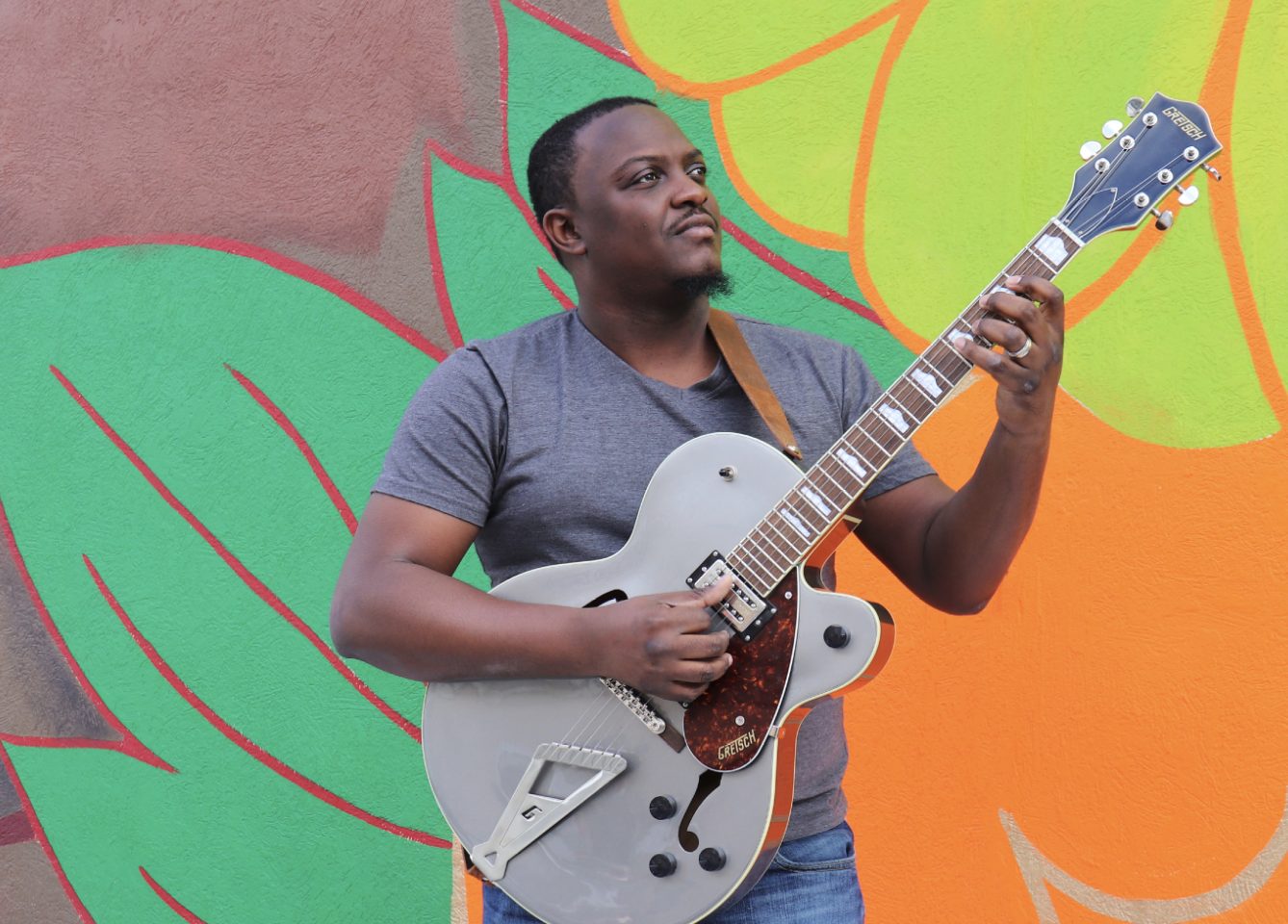 What’s that beautiful sound flowing through the bar?

You look up and see Emmanuel Nsingani – his tact, his earthy emotional voice that ranges from guttural lows to sobbing highs. The buzz in the bar mellows as his music draws attention.

You don’t have to be a jazz fan to be drawn to Nsingani’s singsong afro-jazz fusion. It’s fascinating to watch and hear.

Although he adds a few covers, most of his music is his own. He writes and sings lyrics in his native Lari, a language of the Republic of Congo, where he was born.

Nsingani came to the United States in 2014, first moving to Raleigh, North Carolina. A friend later told him that jobs were plentiful in the Harrisburg area, so he found work and came to love it here.

Shortly after arriving, Nsingani visited the Guitar Center on Jonestown Road. He was drawn to the wall of bass guitars, but there was a problem. Someone else was already there, holding a bass, ready to try it out. Nsingani took his own bass and the two strangers stood back to back, almost like a shootout.

Nsingani was silent. He finished playing, smiled and put the guitar back on the wall. Alonso, a professional musician, said he stopped him, gave him his card and told him to call if he ever wanted to play. It took a few weeks, but eventually Nsingani called, and the two have been occasional collaborators ever since.

“It was like magic from the first time,” Alonso said.

Since then, Nsingani has performed with many local musicians. He has his own band, the Emmanuel Nsingani Band, which includes drummer Jordan Davis, Sam Brooks on sax and Connor Rohrer on keyboards. Before COVID, the band regularly played together at the SpringGate Vineyard Estate outside of Harrisburg.

Nsingani has performed throughout the region, including River City Blues and H*MAC in Harrisburg, Fenicci’s in Hershey, Babe’s in Palmyra, and venues in Lancaster and York. He has performed at festivals and events, been part of the 2021 Harrisburg Jazz Walk, and won Best Jazz Band honors at the Central Pennsylvania Music Awards, known as the local Grammys. He is nominated again this year.

Although the pandemic has halted live performances, Nsingani is slowly coming back. He and Alonso will perform with drummer Jeff Stabley in early March at the Appell Center in York.

Alonso, d’Annville, said he would often write progressions to start a conversation between the three of them.

“It’s a bit of a roadmap,” he said. “The three of us take him wherever he goes.”

Following in his father’s footsteps, Nsingani learned the guitar at the age of 4.

He was self-taught, although he also later learned to read music. He plays guitar, bass, keyboards, drums and played cornet in a Salvation Army band. He has been performing on stage in front of crowds since he was 10 years old.

While he will play pop, rock and R&B when performing with others, he writes and performs Afro-jazz music for himself.

“My afro-jazz is a mixture of the music we grew up playing in our country, which has different ingredients mixed in with the jazz I’m learning in the United States,” Nsingani said.

That explains why he and Harrisburg native Shawan Rice bond so well when they’ve played together. Rice, who is now based in New Orleans, said they “both play black American music inspired by everything from jazz and blues to funk and soul.”

“I feel like he’s totally invested in the project,” Rice said of Nsingani.

The pair have performed together on several occasions, including the Kipona Festival in Harrisburg and fundraisers in Lancaster.

Although Nsingani wrote most of his music in Lari, crowds still tune in.

“Music is spiritual, and it’s a language that has no barriers,” he said.

Still, he would like people to understand his lyrics, which is why he writes new music in English. One of the songs on his new CD will feature “Daddy”, whose lyrics include:

“I cry every day when I think of you

Lost in my world where comfort is my guitar

Since you left, daddy, my life has changed

Could you see where you are from

the man i have become

“I just realized how easily I write about what I’ve been through,” Nsingani said. “Unless I’m asked to write something on a particular topic, I’m usually a storyteller. I tell stories about where I lived.

He finds his identity singing in his mother tongue, although he also speaks French, English and two other Congolese languages, Lingala and ki tuba.

“I’m a very shy person, and I think sometimes it’s through music that I can express myself easily,” he said.

Alonso confirmed that Nsingani’s message is getting through.

“He has this ability to capture an audience,” he said.

Nsingani sometimes sits with Andy Alonso and Friends. But, Alonso said, Nsingani has too much to offer to stay in the background playing on a bass.

“If you’re going to use it, use it to show what it can do,” Alonso said. “Why hire Stevie Wonder if you want him to tickle the ivories in the background for you? You want it front and center.

For more information on Emmanuel Nsingani, visit his Facebook page and see videos of his performances on YouTube.

If you like what we do, support our work. Become a friend of TheBurg!