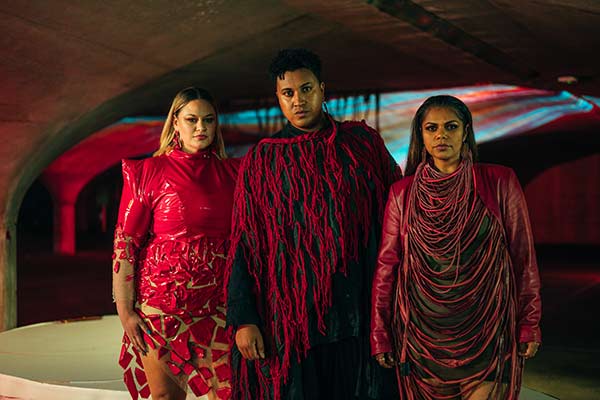 ‘RĀIN’ is the sequel to Samuel’s 2021 breakthrough track ‘RECKŌNING’. ‘RECKŌNING’ is also the title of Samuel’s theatrical performance work which fuses indigenous cultures and combines ancestral stories. Samuel will once again perform this work at the Frankston Arts Center in Victoria.

‘RĀIN’ is the mesmerizing result of the collaboration of an unlikely trio of powerhouses, produced by ARIA Award winner Pip Norman, showcasing a fusion of two indigenous cultures – from Aotearoa, New Zealand and Te Whēnua Moemoeā ( Dreamtime Land), Australia.

The song uses references to the elements to deliver messages of power and strength – it’s uplifting and upbeat, its verses and chorus equally catchy.

Here, to celebrate this song and this collaboration, Samuel takes the time to list his top five Indigenous creators and changemakers. Check it out (and listen to the new single) below.

Hello everyone. My tribe is Ngati Tuwharetoa (NZ) and Yoruba – Nigeria as well. My name is Samuel Gaskin.

Aboriginal culture means everything to me. For me, that is where the truth lies. This is where the answers lie and where I turn for guidance. In a world that has its values ​​and belief systems all over the place and upside down, this culture is what grounds me in the most powerful places. Knowing exactly who I am, where I’m from and what I’m here to do, be and inspire.”

Shareena Clanton (Wongatha, Yamatji, Noongar, Gija, Cherokee, Blackfoot, African American). Shareena is a fierce film, television and theater actress and activist. She is best known for her role as Doreen Anderson in the TV drama “Wentworth” and is currently starring in “Joe Vs Carole” on Netflix. What I love most about her is her bravery when it comes to telling the #Truth. She does not suffer from fools and will not hesitate to silence the racist and outdated colonial rhetoric still so present on these stolen lands. This is an extremely difficult thing to do when the entertainment world we live in is so overwhelmingly controlled by straight, white, privileged men. My love and respect for her is so REAL and I’m very proud to call her a friend.

Jessica Mauboy (Kuku Yalanji and Wakaman wife who also has Indonesian bloodlines from her father). If you don’t know who she is, you must have been living under a rock. She stole everyone’s heart on ‘Australian Idol’ in 2006 and has been making the world fall in love with her ever since. In my opinion, she is Australia’s Beyoncé and the most talented and hardworking performer in the game. We met in 2007 when I was hard at work as a commercial dancer. She was in a girl group with some other friends of mine and we hit it off immediately. What I love about her is that even though her rise has been astronomical, she still remedies that same humble, fun, lit ray of sunshine that I encountered all those years ago. Deep down, she’s just a beautiful soul who loves to sing and share good vibes with the world. I’ve never seen her get caught up in the fame game and it makes my heart smile. The work she is doing right now is definitely her BEST yet. She is definitely in a place of love and freedom and you can feel that in her new music which I LOVE.

The Merindas. The Merindas are the collective strength of female Ballardong Whadjuk Nyoongar Kristel Kickett (from Tammin, WA) and Candice Lorrae of Jawoyn and Thursday Island Legacy (born in Darwin, NT). The Merindas’ career continues to go from strength to strength after recently securing a global publishing deal with GAGA Music and live performance with Australia’s largest independent booking agency, Select Music. They also recently presented at the SXSW virtual conference and were announced as nominees for the Music Victoria Awards (2020/21). Merindas are what the world needs most. As far as I’m concerned, the future of music is Indigenous, and these beauties embody all that it means to be strong, powerful women. The way they weave their artistry with their culture is effortless and I am truly one of their biggest fans. We met at a gig in New Zealand where we were both playing with Yothu Yindi and the Treaty Project and have remained best friends ever since. The way they juggle being full-time artists with motherhood and standing up for their communities is inspiring, as is their SASS and SWAG. These are going places so be sure to start tracking them NOW!

Quack Pirihi. I just started following them on Instagram, but am I in love yet. The way they talk about “hard” things, especially when it comes to the intersection of “culture” and “traditions” versus being queer/non-binary and/or LGBTQIA+ , is simply magical. To me, they are what leadership looks like. Being able to embrace all parts of yourself and not neglect one for the other. Being BRAVE enough to question things that don’t seem right or extremely colonial. Massive fan and highly recommend following them for consistent Indigenous queer excellence.

Zacharia Lowah Fielding. Zaachariaha’ is the Anangu Pitjantjatjara Yankunytjatjara crowd. Where to start with this one? Not only are they the lead singer of Electric Fields, but they are also the most incredibly talented visual artist. My dream is to own one of their giant works of art and have it hanging on my wall very soon. The fact that they shine so brightly and take up space in this country gives me hope. How many superstars like them have you seen centered in Australia? NONE, that’s right, zero. So I don’t lose sight of how important it is for them to shine so brightly and have so much attention on them right now. They are my favorite artist in this country and also the most beautiful of humans. We met many moons ago on a certain TV show where we were in the top 50 or so. None of us were featured in the final cut, thanks to the ancestors because watch us now HUNTY! If you are unfamiliar with Zachariah and electric fields, INTRODUCE IT immediately, if not sooner!

‘RĀIN’ is now out. Samuel performs his award-winning theater show “RECKŌNING” at the Frankston Arts Center (Victoria) on May 8.

The Next Greatest Musical Artist in the Eastern Region